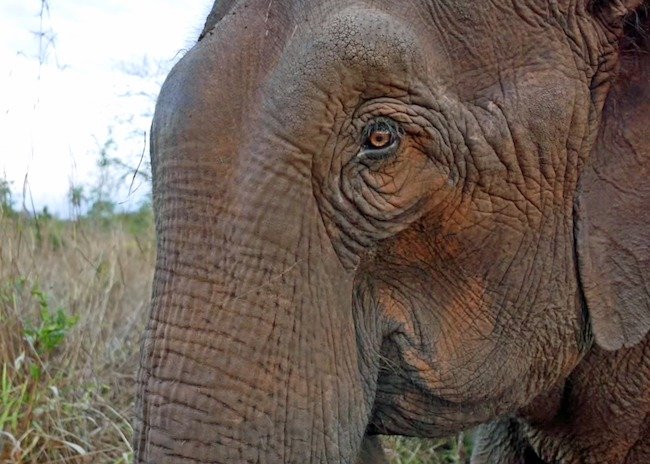 Each animal that comes to Elephant Sanctuary Brazil becomes part of our lives and yours. We feel lucky to be part of each individual’s healing journey and many of us can relate to some of their challenges and victories. The emotions that surround them create a connection that we can’t always explain. Life at sanctuary provides us the opportunity to witness beautiful moments with them – moments that we may never have talked about with you before. Today we start what (we hope) will be a monthly series, where Scott, Kat, and occasionally others, can share some of those special experiences with you, whether they be large or small.

Today Kat shares a small story about Guida, the well-loved elephant that we thought would live forever. Kat had a particular fondness for Guida, even though she was a bit of a spitfire, and has some lovely and personal memories of time spent with her.

When we first met Guida, before she came to sanctuary, we’d never witnessed an elephant who displayed such severe stereotyping behaviors. Nothing could deter her – not food, not human interaction; regardless of any engagement attempted, she never broke that behavior. The first time we witnessed her let go of that self-protective instinct was when we introduced her to the transport crate. She seemed to understand instinctively that this was a good thing. By the time she arrived here at sanctuary, her stereotyping behaviors had decreased by about 70%, and continued to decrease significantly over the weeks to come.

Guida and Maia arrived at ESB when only the first yard had been built. The barn wasn’t even completed when we were asked to take them, so we hurried to finish it as quickly as we could. There was such an urgency to get them here that the habitat was not as big as we’d planned. That soon changed and we were able to expand into the five yards we have now.  Even when she and Maia were sharing the one yard, it was bigger than anything she’d even known. There were no chains, there was open space, new smells, natural surroundings, and fresh food. All of that stimulation meant that she no longer had to go inside herself as a form of self protection.

Kat says, “She had been in self preservation mode. She just had to mentally go somewhere else. Once she got somewhere she knew was safe and beautiful and she had space, she came out. It was that simple… She showed us within the first few days that she was actually one of the strongest elephants we had ever known.”

We were working on completion of Yard 2 when Guida started showing signs of wanting new places to explore. Guida was appreciative of what she had, but she knew there was more out there for her. She would look out into the distance, relaxed, perhaps imagining what was to come. Each time we expanded our space, she was content for a few weeks and then seemed to look farther out into what was next.

Every couple of months, we finished more construction and could open up another yard to Guida and Maia. Like clockwork, the second a new yard was available, Guida would walk in, stop and look at you – very present in that moment. She let out really soft rumbles, repeatedly, for hours. She would walk thirty steps, look around, eat a couple mouthfuls of grass, and rumble – exploring down the fence then stopping to rumble again. Guida was often cheeky, but in these moments she seemed so appreciative of almost every new inch that was open to her. She and Maia would meet up and have big trumpet parties as each yard was opened to them.

Kat describes, “Guida always seemed to be connected to the bigger picture. For an elephant that struggled so much in her life before sanctuary, she shifted instantly with new spaces. It wasn’t what we expected, but was completely beautiful because she seemed so strong and yet had this quietness about her during these moments.”

Guida was a near-perfect example of how captivity can physically, emotionally, and spiritually damage an elephant. Her change was also a representation of how, when given the space and opportunity for choice, an elephant can transform into someone new. Guida was a bit of a punk, but her growth reinforced for us that we were on the right path and we had made the correct choice to create this space for healing.

Your ticket for the: Sanctuary Memories: Guida’s Connection to Sanctuary