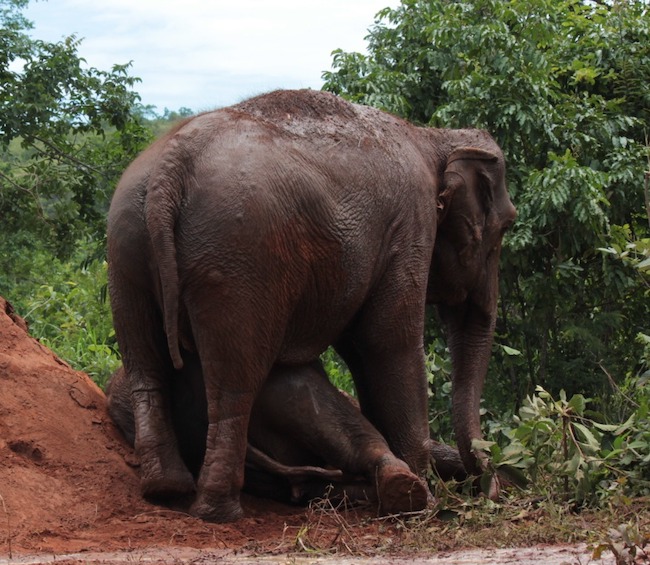 Today, as part of our Sanctuary Memories series, Kat reflects back a bit to the early days of Elephant Sanctuary Brazil, to a moment signifying the power of forgiveness.

As so many of us know, Maia and Guida were inseparable souls here at the sanctuary, an accomplishment made even more miraculous by the fact that there was decades of aggression between them, particularly from Maia’s end. That relationship began to shift here almost immediately, even though there were a few brief moments of posturing for dominance in the early days. Even so, there were never any physical altercations at the sanctuary, as there had been in their past.

Both Maia and Guida were excellent at napping, particularly after breakfast. (Maia is still known to get extra sleepy after a meal.) One morning, not too long after their arrival, the two were going along with their morning routine – eating, hanging out by the itchy-scratchy tree, standing next to the mud wallow – when Guida decided to lie down for a little snooze. After she lay down, Maia walked up behind her and stood next to her. She then decided to instead stand over Guida as she slept, which is a sign of being protective and showing affection. You can imagine that it’s not easy for an elephant to stand over another elephant. The process involved Maia placing her front legs just so over Guida’s back legs, then sort-of scooting up toward Guida’s belly. The two of them stayed in that position for about half an hour.

This action “was a statement about both of them and how quickly they were learning to trust and forgive,” Kat said. “Generally, Maia was the elephant who knocked Guida down in the past, and would sometimes hit her when she was down. So, by lying down that way and allowing Maia to stand over her, Guida was putting herself in a really vulnerable position.” If Guida decided to stand, Maia could prevent that from happening if she wanted to. This 30-minute nap spoke volumes about the level of trust Guida had already developed in Maia and how she was willing to be exposed, both physically and emotionally.

As for Maia, we as caregivers saw that she intrinsically knew what she was “supposed to do” as an elephant, and that she had built up such a level of affection for Guida that she would rather stand watch over her than take a nap herself. For Maia, that would be a big sacrifice.

Kat remembers, “We stood there watching for a long time, making sure not to disturb them. And just being in awe of how quickly they were willing to erase 40 years of history and give each other the opportunity to move on, almost seamlessly, from such a dark past.” Each elephant has something to teach us – about healing, about listening, about forgiveness, and so many other things. This small moment encapsulated so many of those lessons all in one and will resonate with us always.

Your ticket for the: Sanctuary Memories: Daring to Forgive