This page chronicles Ramba's rescue and her first days at sanctuary. Please click on this text to read about, and watch, Ramba's healing journey at sanctuary with her new herd.

Together we raised the cost of Ramba’s flight!  Our thanks to everyone who helped make it happen.

OUR THANKS TO RAMBA’S FLIGHT CREW FOR “HUGGING HER HOME”!

Posts from Ramba's rescue and first days at sanctuary. 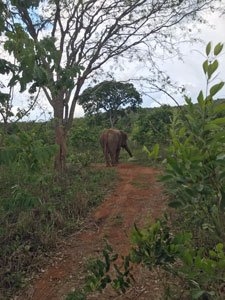 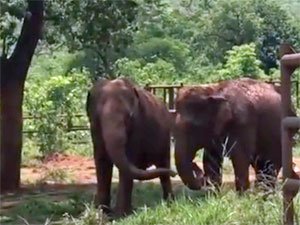 The Gate Between Ramba and Rana has Been Opened! 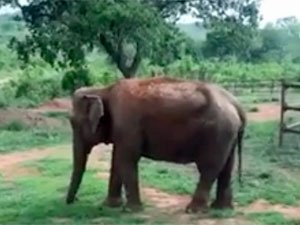 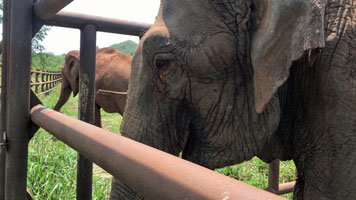 Ramba and Rana at the Fenceline! 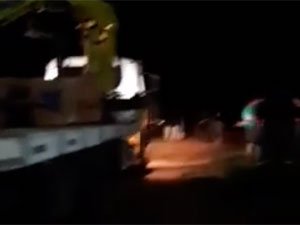 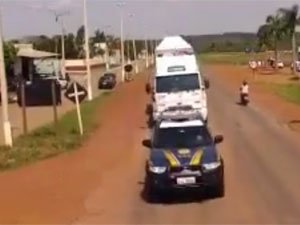 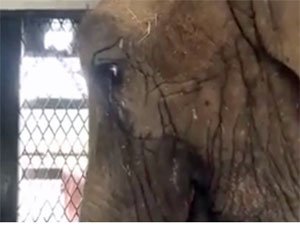 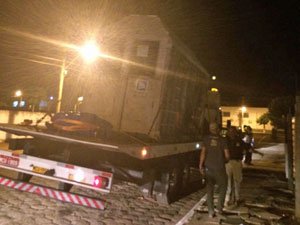 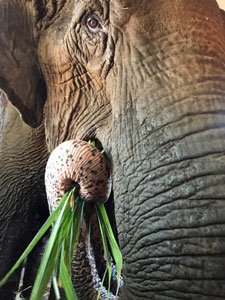 An Update From the Road 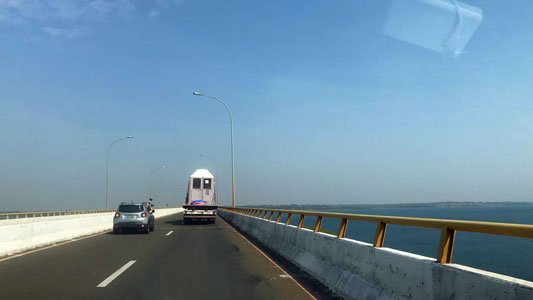 A Late Start But Ramba is Good 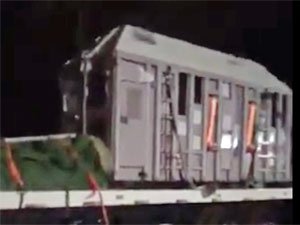 A Late Night Update From The Road 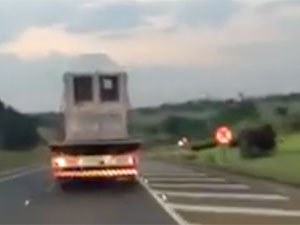 A Quick Check-in From the Road 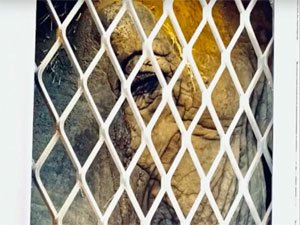 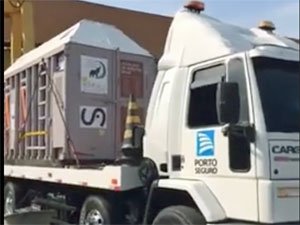 Ramba Has Landed in Brazil! 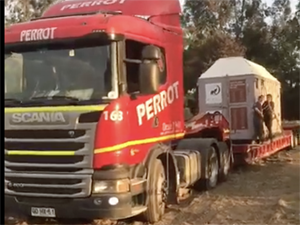 Ramba is On Her Way to the Airport! 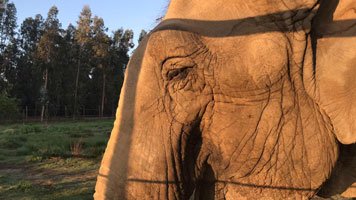 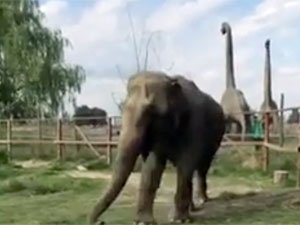 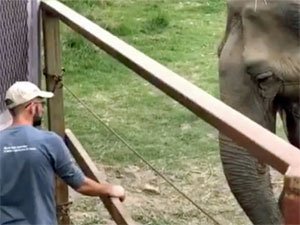 Ramba’s Journey: Footage from the First Day at the Park 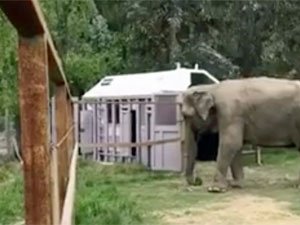 Video Update With Scott and Ramba in Chile 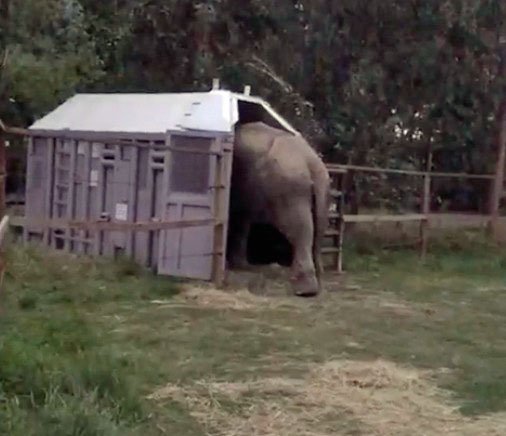 Ramba Takes Her First Steps Into Her Crate! 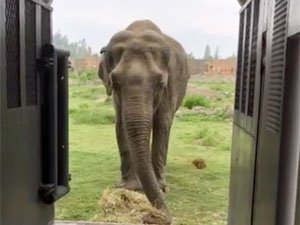 A Chilly Breakfast for Ramba 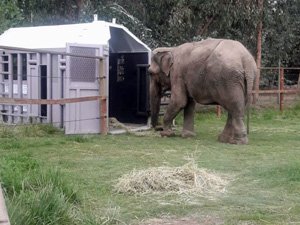 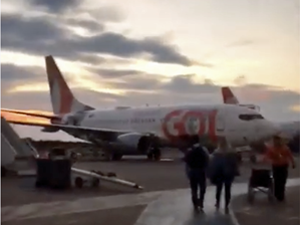 Scott Is In Chile! Here We Go! 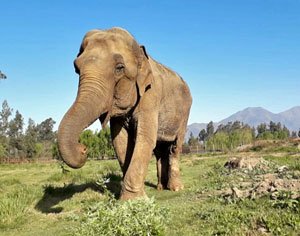 her story from circus and roadside zoo...

Ramba is known as the last circus elephant in Chile

ALTHOUGH HER CIRCUS LIFE BEGAN IN ARGENTINA

In 1997, she was confiscated from the circus “Los Tachuelas” for issues relating to abuse and neglect. Although she was officially “confiscated”, Ramba remained with the circus but was not allowed to perform.

THE FIRST RESCUE EFFORTS BY ECOPOLIS AND SCOTT & KAT BLAIS

Ecopolis, a small NGO in Chile, started a campaign to have Ramba removed from the property of the circus, where she continued to lead a solitary and abusive life. Years later they gained permission and made plans to relocate her to a roadside zoo as a temporary home. After several failed attempts at loading her into a trailer, Scott and Kat Blais were asked to come to Chile for her relocation. The judge stated it was Ecopolis’ last chance. Although the day of the move was less than smooth, with issues involving the circus and police protection, Ramba graciously boarded her transport trailer and was brought to her new home.

AFTER HER 1ST CHANCE AT SANCTUARY FALLS THROUGH, GLOBAL SANCTUARY FOR ELEPHANTS STEPS IN

After arrangements for her to go to a sanctuary in the US fell through, Ecopolis was faced with the responsibility and expenses of caring for an elephant and finding her another suitable home. Elephants are a big responsibility and a geriatric elephant with several pre-existing health conditions is a handful. Global Sanctuary for Elephants has stepped in, helping to direct her care, training caregivers, providing funding for supplements, paying caregiver salaries and offering her the home she needs to live out the rest of her life with other elephants, roaming through pastures and forests, enjoying a life of retirement.

Ramba is an utter gem of an elephant but she hasn’t found the security to fully open up emotionally. Although she loves human interaction and companionship, she does not long for human touch. She has two phenomenal caregivers, Carolina and Consuelo. They can touch her; it’s just not something that she necessarily looks for or engages with. Vocally she is also very reserved, she will rumble but does not vocalize in other ways (no squeaks, burps, trunk pops, whistles, etc.) We believe that when she is with other elephants, this will change. Hopefully being with other beings that can truly understand her journey, in a protected space, will allow her to become vulnerable to the healing she still needs to go through.

...to rescue, sanctuary and sisters

Ramba is a geriatric elephant who suffers from a variety of issues as a result of a hard life.  Please help us take care of her body while sanctuary and her new sisters heal her soul.

We understand our supporters find a special place in their heart for certain elephants. If you have followed Ramba’s wait for sanctuary and are looking forward to seeing her new life, you can show her some extra love and support. You can become her Ele-Guardian.

We are deeply grateful to each and every one of you who helped give Ramba her second chance at life. At sanctuary.

Your ticket for the: Ramba’s Rescue