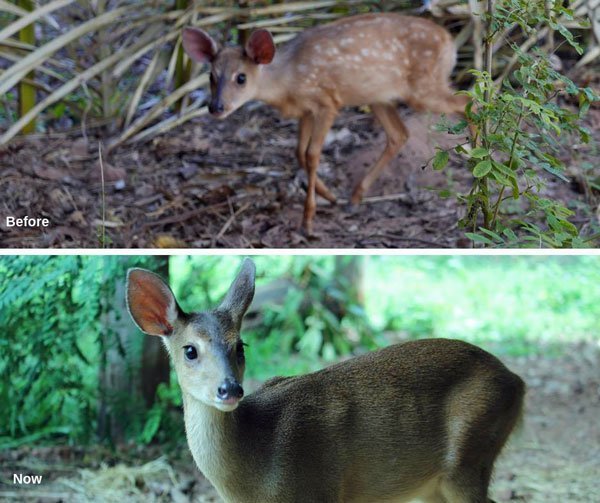 This beautiful boy is one of our residents for rehabilitation and release- a gray brocket deer. Scott just also happens to be completely smitten with him. The statement of how stunning he is (although he usually says ‘she’) is something i hear at least a few times a week. I won’t lie, he’s lovely.

We share him now because he’s about to go into the big yard and chances are we won’t be able to get photos of him once he is in there. Not only is the area kept very ‘wild’, so things are overgrown, but we worked very hard to ensure he didn’t lose his flight response. As an animal low on the food chain, he needs it to survive. So any snap of a twig and he’s off running. He has done very well.

Depending upon which story you believe, his mother was either hit by a car or killed by a hunter. They spotted him after and at a few weeks old, chose to keep him until he was a little bigger, so he could be eaten. His diet consisted of things like rice and beans. Thankfully a neighbor found out and intervened, calling one of the ESB volunteers to see if we would take him.

He’ll spend at least a few weeks in the big yard, but how he responds will determine when he is released. When it is time to release him, we’ll open up on the side closest to the Asian elephant habitat, which will put him with other deer (they like the elephant scraps) and provide the best protection from predators. The rest is up to him. As a side note, he would already not be with his mother in the wild.

Your ticket for the: Rehab & Release Deer Ready For Next Step