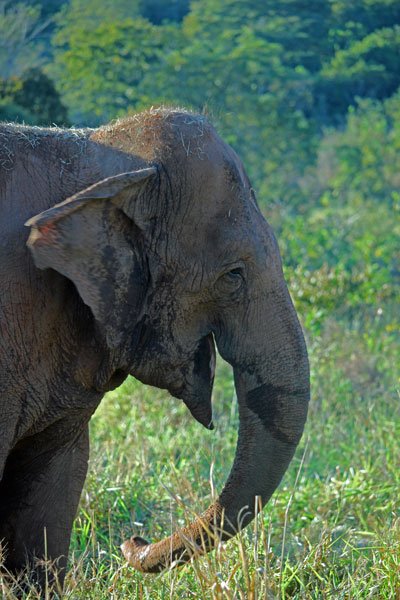 We’ve been posting recently about the ways that Lady, Maia, and Mara have all exhibited a tremendous amount of personal growth lately. We haven’t been talking much about the growth we’ve seen in Rana.

Rana’s growth is more subtle, but it’s the type of growth that allows everyone to flourish around her. Its impact on the evolving dynamics here is astronomical. This post is going to be Part 1 of a two-part post. Today, we will talk about her overall growth, and tomorrow we’ll share a recent story about her that exemplifies her growth.

Rana has a bit of a reputation for being soft, sweet, and even a little innocent. It’s an accurate reputation; she is all those things (although she is also much more). When Rana first arrived and met Maia and Guida, she was overeager to be their friend. She was relentless and wasn’t ready to listen to what their behavior was saying. She learned her lesson from that experience and seemed to take it to heart. When Guida passed away, and Maia needed space, Rana didn’t push. There were times that the two would be near each other, and Rana just had a bit of “I’m here if you need me” energy to her. She was available when Maia needed her, and gave Maia space when that’s what Maia wanted (which was most of the time). Having this peripheral relationship was beneficial for both of them. They both had a lot to process in the wake of Guida’s passing.

When Ramba came, Rana shifted again. Rana adored Ramba from the beginning, but she seemed almost a little nervous that she would do something wrong. The bond between the two of them wasn’t instant. Rana seemed unsure how to move forward, seeming to be whatever it was that Ramba wanted. It took them a little while to touch, even after they shared space. It’s part of that innocence of Rana that is so endearing. She just wanted to be there in the capacity that Ramba needed, which is a vital part of what true friendship is.

Then Lady arrived and, once again, Rana was excited to see a new elephant. Rana had lots to rumble, squeak, and vocalize about. She quickly learned that she couldn’t vocalize near Lady without Lady walking away, and again Rana adjusted her behavior. She was excited to be in the same space as Lady, but still, we would see Rana being cautiously watchful of what Lady’s body language was showing. Rana would walk slower than usual, and be more reserved. She seemed to recognize where Lady was in the moment, and honor it.

Mara arrived a few months later and everything was completely different. Rana responded so passionately. It wasn’t her “Yay! A new elephant!” reaction, but something more – and we still don’t and may never know what caused that reaction. While Rana was super excited and vocal at first, she still was able to give Mara the space to take her time to process. The emotion was incredibly overwhelming to Rana, the humans, and even those who watched the videos of it. For Mara, who had not seen or interacted with another Asian elephant in decades, it was possibly even more overwhelming. Rana seemed somehow to comprehend and respect that. She was able to step back a bit and to let their relationship progress at Mara’s pace.

Now, Maia is trying to find her new place here. Maia’s behaviors are shifting, and apparently, so are her needs. Rana seems to be recognizing both these shifts in Maia and is being incredibly responsive.

Maia needed them to give her a chance to demonstrate that she is evolving into an elephant who is aware of their needs. Rana seems happy to give her that chance to evolve into something different. Rana doesn’t have the “wise old soul” energy that Guida had, but she is incredibly sensitive to the needs of the others. It’s her superpower, and it’s humbling to watch her put her desires aside to be fully available to the others as they need her to be in that moment. It’s a lesson we could all learn from Rana. ❤️

Your ticket for the: Rana’s Growth: Part I