RanaBug Is a Very Clever Girl ;) 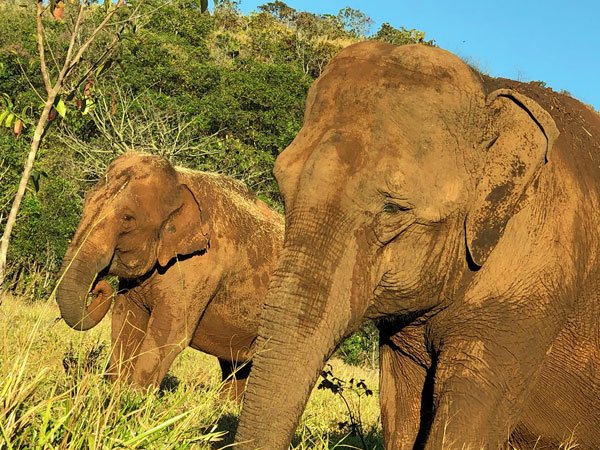 Rana and Mara seem to have a balanced relationship. Being together seems to be the most important part of the equation for them. Maia and Guida would sometimes wander off to different parts of the habitat and spend time apart. That’s something we haven’t seen with Mara and Rana. They will go in opposite directions, but not too far or for too long.

Sometimes, we need to lead Rana and Mara somewhere. It’s usually related to mealtime, but occasionally, there are other reasons such as treatment or habitat cleaning/maintenance. Most of the time Rana leads, but sometimes Mara is in front.

Rana, when feeling lazy, or when she is following Mara and wants to be first, has learned a ploy to trick Mara into not following.

When Mara is in the lead, she is closer to the 4wheeler (ATV). Rana, being last, will only let Mara get a couple of steps ahead of her before she flaps her ears and squeaks. Of course, Mara immediately turns around and walks over to check on her friend. Once Mara is next to Rana, Mara has to vocalize, then they smell/touch each other and rumble. A couple of minutes later, they will start following the 4wheeler again.

Mara seems to enjoy her humans, and she loves to wander and explore, too. She follows easily when asked, but there is one thing Mara likes more than everything else combined – Rana.

If Rana doesn’t want to follow, or if she’s feeling sleepy and wants to take a break, she knows exactly what to do. We don’t know if Mara has caught on yet, but Mara certainly stops following and comes running to Rana every time.

Rana is still a sweetheart – she isn’t refusing to go, she’s just slowing everything when she wants to. It doesn’t happen super often, but regularly enough to make us laugh. She knows what she’s doing, and as long as Mara doesn’t mind, we don’t care. It is comically slow, though, whenever Rana wants it to be.

Photo: Mara is closer, and Rana is behind her.

Your ticket for the: RanaBug Is a Very Clever Girl ;)

RanaBug Is a Very Clever Girl ;)