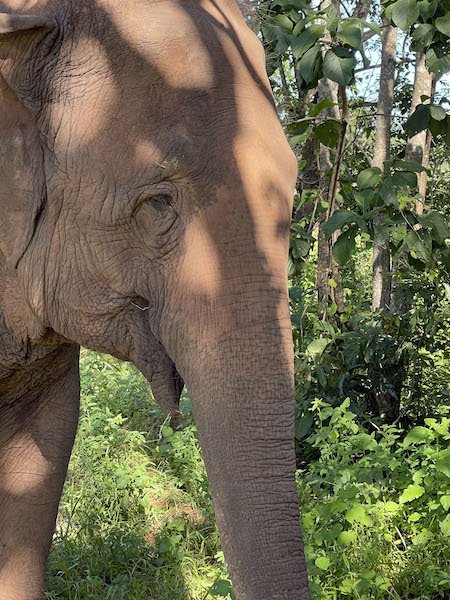 Once our elephants have been here for a bit, they get a bit set in their ways and routines.  It’s true for most species – even humans. Though each day is a little different, there are certain things they come to expect in specific ways.  It’s something we don’t necessarily notice, and it’s likely the elephants don’t either… until a new caregiver starts to work with them.

Our training process for new caregivers is extensive. It takes a long time before a caregiver begins physically working with the elephants. Mateus has progressed through his training enough that he is starting to feed the elephants.  Although they have seen him around for many months, they are now interacting with him and testing him a little, something they have done with others before him.

Elephants tend to take respect seriously – if you respect them, they are much more likely to respect you.  When new caregivers begin working with them, they tend to test to see if the new person respects them.  They also like to see how much the new humans know.

Some elephants test their humans in a lot of small ways. A great example is drinking from the hose.  Mara drinks best if she has the hose in her mouth. Bambi likes to hold the hose in her nose and then put it in her mouth.  Rana is generally indifferent.  Something we have seen with elephants and new caregivers is when they offer them the hose, ‘normal’ and calm behavior sometimes disappears. They will chew on it or try to take the entire hose into the habitat with them or entice the other elephants to play tug of war with the hose.

When new caregivers first arrive and begin watching the processes, they see the perfected routines where everything looks simple and easy.  Then, the first time they try to give the girls a hose, the elephant may break it and drag it into the habitat.

When Scott or Kat feed the three together – Mara, Bambi, and Rana – Rana is generally pretty respectful.  She stays on her own food, and once Mara is done, she walks over and picks through the scraps.  When other people initially feed them, she may start walking to Mara’s food after a few minutes.  Caregivers will grab more hay for Rana to coax her away from Mara’s food and sometimes that is her goal.  Many times she is just trying to see what she can get away with by learning what a new person will notice and, more importantly, what they won’t notice.

Your ticket for the: Rana the Caregiver Gatekeeper