Rana Is Getting a Little Fluffy 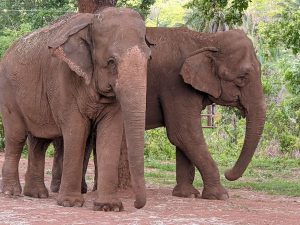 Rana is getting a little fluffy, which is the nicest way we know to describe her recent weight gain.

It’s something that happens when you have a sick elephant; we need to feed Mara extra food. There is no way to keep Rana from eating some of Mara’s food unless we separate them from each other. Frequently when we separate them, Mara will only eat a little bit of food, and then she wants to go back in with Rana and Bambi. When we separate them with distance, it works a bit better, but Rana will still “clean up” after Mara. Even though Mara continues to eat better, she still doesn’t finish everything. While there is usually only a few pieces of fruit and vegetable left, it’s the hay that Rana grabs. Bambi does a great job of respecting Mara’s food, but Rana seems to have no issue walking up to Mara’s food and helping herself.

Mara takes very dainty bites of hay and pauses between bites. During this pause, Rana will go over and shove a large chunk of hay into her mouth. It’s the same way Maia eats, but Maia is more of a tank than Rana, walks more, and gets much less hay.

Rana’s weight gain isn’t ideal, but it also isn’t dangerous. Her feet are in good shape, and her body has decent muscle tone. So her frame can support a bit of excess weight. We will put her on a diet at some point, but Mara’s weight and health are not stable enough to do that right now. In the meantime, we have a chunky elephant, who is delighted to have two friends who receive extra food at each meal.

Photo of Rana (left) and Bambi (right), scratching on the same tree.

Your ticket for the: Rana Is Getting a Little Fluffy

Rana Is Getting a Little Fluffy