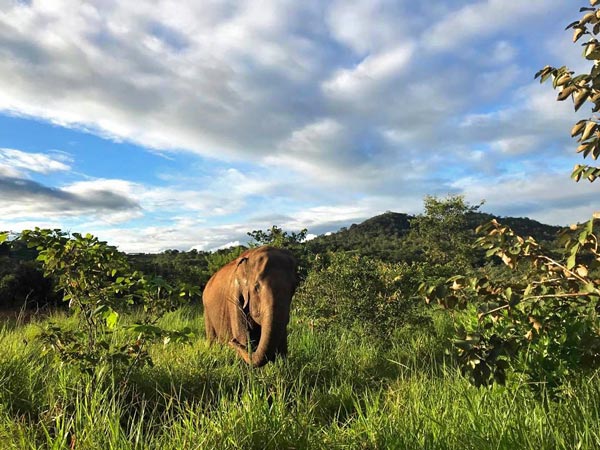 Rana Bug showed her soft and concerned side this morning. One of our dogs, Minnie, makes a reverse sneeze noise from time to time. It’s nothing serious, and it generally lasts less than a minute. This morning she did it at the barn when Rana was already in the chute for treatment and some training. When Rana heard the noise, she seemed genuinely worried about Minnie.

First, she trumpeted a couple of times, but not a trumpet we have heard from her before, it was somewhat of a mix of her deflated and blaring trumpet. After her trumpets, she leaned into the bars towards Scott and let out a very low and long rumble, followed by another. Scott reassured her all was fine, and by then Minnie had stopped making any noises.

In the past, Rana has made it clear that she is an empathetic elephant, but it was interesting to see her care this way for one of the dogs. When Rana initially arrived, she didn’t like dogs. There were several at the hotel that would bark at her, so she didn’t have good past experiences. At the sanctuary, she quickly learned that our dogs were different and that they respect the elephants and their space, but we wouldn’t exactly call them friends. She allows them very close without any fear or even paying attention to them, but generally doesn’t interact. So it was curious to see her response. Once she was reassured, she relaxed, and all was well again.

Your ticket for the: Rana Bug: An Empathetic Elephant