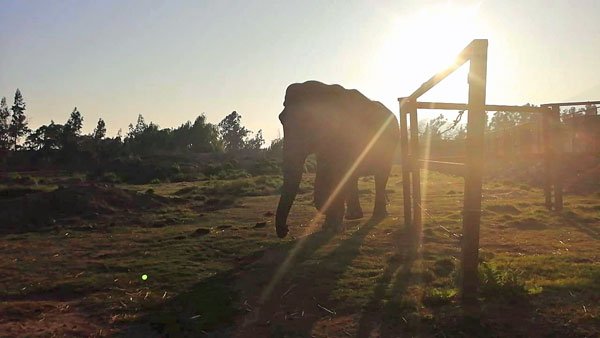 To think that soon, we won’t be receiving photos of Ramba in her small yard on our phones each night, is strange. Ramba’s story of rescue is a long one, and it seems many people don’t know all of the details.

Scott first heard about Ramba when we were still at the sanctuary in TN. Ecópolis Disciplinas Integradas – Chile, the Chilean NGO, reached out to different sanctuaries to see if anyone could give them advice on getting an elephant out of the circus. This was 2009. Fast forward to 2011, we were no longer at the sanctuary, and Ecopolis had made significant progress but now needed a different kind of help. They had one last try to remove Ramba from the circus physically, or she would stay there for life. So we flew down to Chile, and that was the first time we met Ramba.

We successfully moved Ramba from the circus (which is quite the story in itself) and stayed with her for about 6 weeks. Our goal was to assess her well-being, transition her diet, train caregivers, and introduce her to positive reinforcement training. She was a total gem from the getgo, and we’ve loved her since then.

Her plans to go to a sanctuary in the US fell through, Ecopolis and the park had to adjust to the reality of having an elephant for more than the six months they thought they would, and we became more of a fixture in Ramba’s life. We made trips down to her to train new caregivers (Caro), went down when she lost weight to make sure she was ok, sent others to train her for procedures like blood draw when we were unavailable, and went down to get another caregiver from the US settled in to stay a bit and train yet another new caregiver (Consu).

At the beginning of this, Global Sanctuary for Elephants didn’t exist. It wasn’t even a thought. It wasn’t until years after we moved her from the circus that we were approached about the possibility of a sanctuary in Brazil. It just so happened that creating such a place also meant that finally there would be somewhere for Ramba to go and live out her life with other elephants. Years of hard work, a little lost sanity, a lot more patience, and hundreds of miles of red tape, and here we are.

Although we could have never imagined how long it would take to get Ramba here once Elephant Sanctuary Brazil existed, there was also a time everyone worried she would never get to any sanctuary. So we are grateful, although it’s still hard to believe. Soon things will come full circle, and Ramba’s rescue will be completed. She will finally be home.

Your ticket for the: Ramba’s Story of Rescue