Ramba at Her Final Rest

Death is something that all of us process in very different ways. In trying to respect what people need and want, versus what others don’t, we created this page to discuss what happens after an elephant passes away. The first note is everything is guided by respect of not only that elephant but her sisters who were left behind.

Soon after we realized Ramba had passed away, we brought Rana out to see her friend. Unsure of whether she knew or not, we wanted to make sure she definitively knew and to ensure that she understood. Rana followed very well, but when she got close to the stream, she seemed hesitant, which made us think there was a chance she already knew. We told her she didn’t have to come, but went across and waited. She joined us shortly after, and we continued to lead her to Ramba. Once she noticed her, it was clear she hadn’t realized up until that point that Ramba had passed away. Her initial reaction seemed to be an excited greeting, “there you are.”  But soon it shifted to her realization that her friend had passed and only her body remains.  Our goal is to give them as much time with the body as they need, oftentimes for them to protect their friend but also to process the reality they face, but the window of time is restricted by the necessity to perform a necropsy.

Maia also needed to be able to see Ramba, especially after losing Guida and knowing how she struggled. We brought Maia out while Rana was still there. Maia’s visit was shorter, as you can see in the video, she smelled all over her gently. After that, she stood over Ramba, making sure her belly touched Ramba (something she did with Guida when she would lie down). We don’t have it recorded because Rana seemed concerned at first, so we 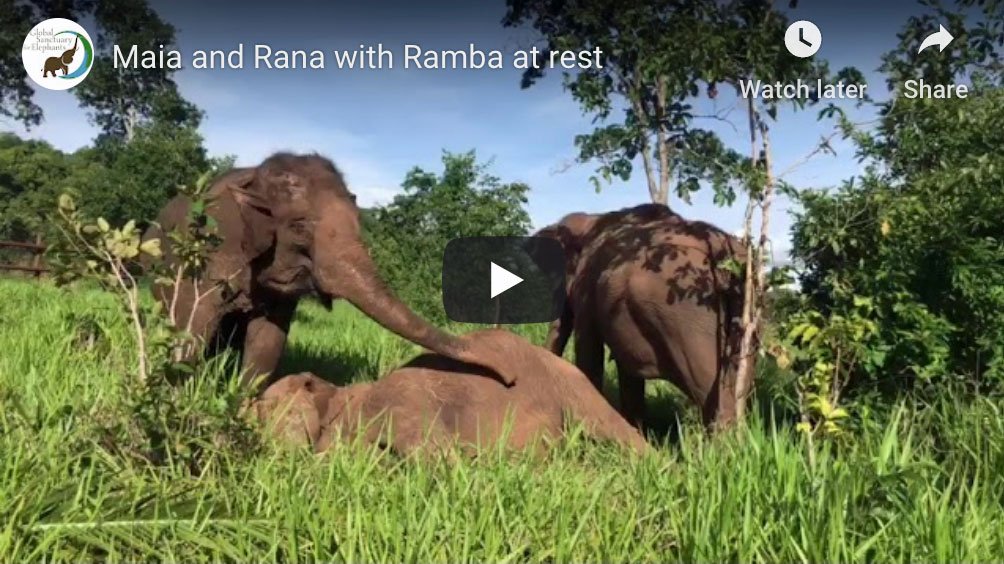 were attentive to them, but once she saw Maia was being loving and gentle, she relaxed. After a little bit, Maia walked away, and Rana was left with her sister again.

Lady was not able to visit Ramba’s body for a couple of reasons. Since Lady isn’t comfortable with the other ladies just yet, bringing her would have meant taking Rana away from Ramba. This alone would have made it a hard decision. But with Ramba being on the other side of the property, we don’t think there was any way we could have gotten Lady there and back within 24-hours. Lady was tired when she returned from the back of 5, which is a much shorter walk. The longer she is here, the stronger she will become, but for now, the distance would have been almost impossible in the time required. And if she did do it, it would have been exhausting, which isn’t good for her either. For these reasons, she wasn’t brought to Ramba. We did sit with her and talk about it, and we know the elephants all ‘talk’ to each other, so we are hopeful she understands everything that happened. At a later time, when she is stronger and more comfortable, she will be able to visit her burial site just like all of the other girls.

Pathologists and the state agencies would like a necropsy done right away, but we know the girls need time to say good-bye and understand the totality of what has happened. But there is a lot that needs to be done in the meanwhile. Ramba’s grave was dug while Rana stood with her. Her grave is in the same yard, but at the other end, where she and Rana spent many days grazing and dusting. The necropsy is performed in the grave for health and safety reasons, and once it is done, the elephant is covered over where they are. This requires moving the elephant. At around midnight, we asked Rana to move away from Ramba, promising we would let her back over when we were done. The back of the 5th yard is close, so we had her follow just to the other side of the fence, closed her over, and positioned lifting straps under Ramba so she could be moved in the morning. Once in place, we opened back up for Rana, who discovered their favorite grass grows over there and was a little challenging to get to come back, and she spent the entire night with her.

At about 6 in the morning, it was time for her to leave. We had Rana follow away, which she did easily. As a side note, we did have one elephant in the past, in TN, who wasn’t ready to go, and things were delayed, much to the annoyance of some involved, but so it goes. Ramba was moved once Rana walked away, and things were set up. While the necropsy was being done, Rana was taken care of, brought hay, palms, mangoes, and other cut up fruit along with Ramba’s coconut water and regular water. We checked in with her about every hour to make sure she was ok. When the team was done, Scott immediately began covering Ramba’s body. There is something very comforting about having someone who loved the elephant doing all of this work- every movement is done with the utmost care and respect. Once she is mostly covered, except her face, the care staff comes and says their good-byes, lay flowers, favorite foods, and other things in the grave. After, she is completely covered, hay, flowers, and other foods are laid on top of her grave for those who visit, and Rana was let back over. Rana initially went over to where Ramba had passed, smelling the area, but then made her way over to where she was buried- ate and stood over her friend.

This process isn’t easy for anyone, but for us, it’s part of our promise to care for them from beginning to end. We are blessed with the good times, and our duty in return is to be there for the not so good. Necropsy results will take 6-8 weeks, but that doesn’t always mean we will get a definitive cause of death.

Hay, palms, and other treats will be periodically left on Ramba’s grave, just as we do for Guida’s. It’s hard to pass by and not say hello and leave a little something. After all, we know their sisters will stop and enjoy a snack while they visit. Ramba and Guida are not buried near each other; each gets a spot that meant something to them, one their best friend is likely to visit again. Although we can never replicate their natural life, we try to provide them with one that mimics some of the more essential aspects. This includes saying good-bye to their friends that have passed, having time to process, and allowing them to visit where they are buried. All part of being an elephant, a best friend, and a loving herd member.

Your ticket for the: Ramba’s Final Resting Place