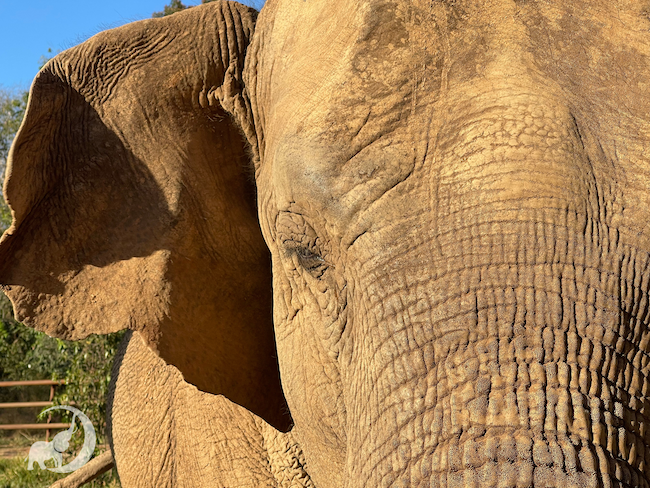 Many of you have asked how Pocha reacts when the other girls occasionally reprimand Guillermina. The truth is that Pocha does not react much at all; she doesn’t seem to be protective of Guille here at sanctuary. This could be because Guillermina was the dominant one in their relationship at Mendoza. Perhaps Pocha doesn’t feel the need to step in on Guille’s behalf.

Pocha’s reactions may also mean she’s beginning to appreciate the space she has to be on her own and discover who she is when she’s not being a mother. For that reason, she could view Guillermina as able to handle herself and might avoid getting involved. It’s always possible that, due to Pocha and Guille’s longtime dynamic, Pocha feels that other elephants may be better suited to teach Guille the lessons that she was not able to give.

The way Pocha is reacting when Guillermina is corrected by others is a healthy response. Guille has lots to learn, particularly where behavior is concerned, and a herd is perfectly suited to teach those lessons. In many cases, Guille might be more impacted by the social influences of the group than she would be by her mother. Pocha likely understands that this way of going about things will help Guillermina adapt more quickly.

We will never know exactly why any elephant behaves the way they do but, in this scenario, it’s fascinating to watch Pocha’s response (or lack thereof) to Guillermina’s corrections.

Photo of Pocha, taking time to herself