It’s time for Guillermina to see her first sunrise ever. Their rescue is HAPPENING NOW. Follow along with them on their journey from Mendoza EcoParque to Elephant Sanctuary Brazil.

Pocha is a quiet and protective mom, while Guillermina has a big personality, acts a little bit like a child with no boundaries.

Pocha arrived at the zoo in 1968 from Germany.  Guillermina was born at the Mendoza Ecoparque.

Loose stool on occasion, but no diagnosed issues. No diagnostic testing done at the zoo

Guillermina doesn’t know elephant etiquette and her mom lets her get away with everything. Pocha had another elephant calf, who was delivered stillborn in 1988

Their Story from Zoo...

POCHA AND GUILLERMINA LIVE OVER THE WALL FROM TAMY AT ECOPARQUE MENDOZA AND ARE SEEMING INSEPARABLE.

That said, in their space there is little room for separation- 4 meters is about the limit they can wander away. Pocha, playing the role of a good mom, is the stronger of the two, still carrying the role of protector. Guillermina is an insecure 22-year-old, timid and a little fearful. Both are curious, reaching up over the wall to smell who we are and what we may have for them.

Pocha is light skinned, in part from rubbing on the concrete walls and in part because of her dry skin. She also wears a lot of pink skin with black polka-dots, common with the natural depigmentation that occurs in Asian elephants. Her moderate frame carries saggy skin, she has a cheeky smile but her bright eyes are shielding her spirit. Instead of being the windows to her soul she has learned to close that portal, to protect her heart while clearly saying, “Be careful, I am here to protect.” That said, the playful spirit of her daughter resides within Pocha as well. 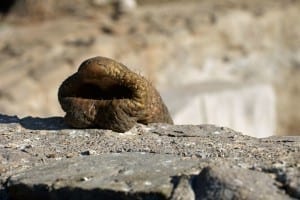 Guillermina has a youthful appearance with a small frame, taut skin and maybe a little too round in the mid-section. Her entire life has been this “pit” of concrete. She has been restricted from exploring any form of dynamic life and with this, her insecurities rule the few choices that she can make. Behind this veil is a bundle of emotion, play, vigor and zest that is ready to explode. When she finally feels real dirt and green grass under her feet for the first time and finds the confidence to explore, she is going to run for days!

During our first visit to meet the elephants, we were walking down a back stairway to see how and if we can position transport containers. At the top of the stairway were two branches, recently broken during a rainstorm. With permission, Scott passed these to Pocha and Guillermina, which was met with great excitement, immediate munching, and play. Guillermina broke into a song and dance that was spellbinding. Spinning, touching, talking, squeaking, raspberries, mouth farts (sorry there is no other way to describe it), little trumpets, honks, and more squeaks. Pocha joined in the fun and games, not quite with the same youthful exuberance of her daughter, but she too momentarily let her guard down. For a time I couldn’t tell where Guillermina’s talking stopped and Pocha’s started, or maybe it was mine. In those moments it’s hard to not join in, to let your guard down, sing and dance and embrace the moment.

Here, in this life of their concrete imprisonment, their elephant joy remains strong. Some from our small group said that they have never before heard nor observed this type of activity in these elephants. Soon their song and dance that will echo through the hills of Elephant Sanctuary Brazil.

...to Waiting for Sanctuary

Habitat built (they will share a space with Maia, Rana, Lady, Mara, and Bambi)

Your ticket for the: Pocha and Guillermina