Overview of Guida’s Bout with Colic

This video was actually from the morning we found Guida (on the right) was not feeling well. She continues to be her stubborn spitfire self and is doing very well. This video is short, but we wanted to post it for a couple of reasons. First, someone had asked if Rana was letting Guida lie down. For those that don’t know the story, shortly after her arrival, Rana would trumpet and run over to Maia or Guida if they tried to lie down during the day (they didn’t really appreciate it.) The answer is yes, she didn’t disturb or stress at all when Guida would lie down. Guida just got up at the start of this video at Rana’s approach. Guida trunk pops and they both rumble, shortly after the video was stopped, Guida laid down again, and Rana allowed it and was very calm. 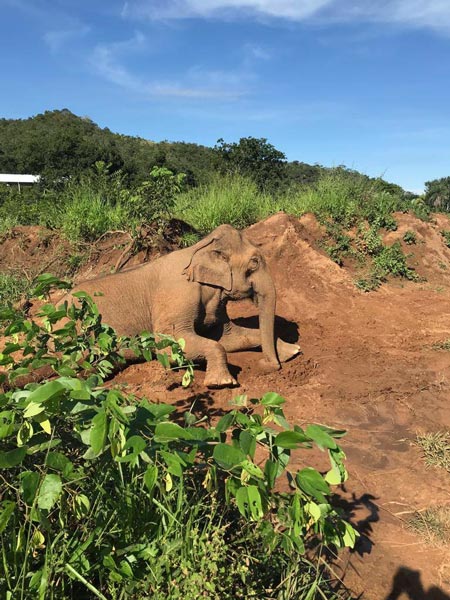 Second, we feel like some people have a worse picture in their head of what was going on with Guida. She was definitely sick, and it was serious, but she remained bright, vocal and mobile the entire time. We included a photo of one of the ways she would lie down to pass gas pockets (fine to do- see this post for more reference on that). She often used dirt piles for support and would sit somewhat up for a moment, then lie fully down, stretch her legs, pass some gas and then get up. It was all done calmly over 1-3 minutes.

We did also want to mention that transparency is essential to us. Those that have followed us for some time know that we share everything- good or bad. We didn’t post the first day due to lack of time, but we did on day two. We don’t want to be posting that she was sick two weeks ago or blindside people if things were to turn tragic. Our posts are somewhat shorter, but we try to share what we can at the moment, so you know what is going on. Our supporters love our girls, and we feel this is part of our job.

Lastly, we do want people to understand that colic kills and something doesn’t have to be done ‘wrong’ for that to happen. A zoo had a 6-yr old elephant die of colic while Guida was sick. It happens. Although there are several kinds of colic, any one of them can end in a tragedy. So although we do all we can, due to limited diagnostics, treatment options and sometimes just how things go, colic can turn into a life lost.

We are thankful for all of your support, and well wishes-we know they can feel the love sent their way from around the world.

Your ticket for the: Overview of Guida’s Bout with Colic

Overview of Guida’s Bout with Colic