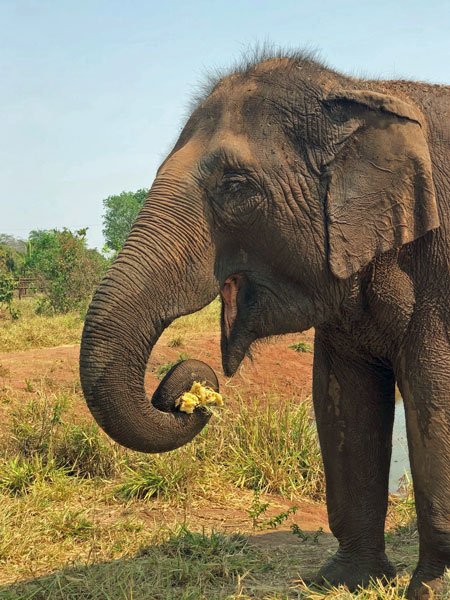 The day our recent cold snap ended, the sun came out early during treatment time. It was like a switch flipped, and all four elephants became sun zombies. It seemed as if the sun and warmth made their brain cells melt. Although the temperature only went down to 60*F (16*C), the morning warmth felt amazing.

Lady’s treatment was in the barn that day, and it went very smoothly. As soon as she went outside and felt the sun, she stopped. When we left the area to treat the others, she was standing in the sun by the water trough with her eyes closed, trunk loosely resting on the ground. When we came back later, she was still standing there napping.

After Lady, we tried to do treatment with Rana. Usually, Rana is our treatment rock-star. That day, Scott would have her get in position, and she would, but every time he walked away to get supplies, she would go back to standing perpendicular to the fence. He would then have to ask her to go back into the “lean in” position again. It wouldn’t take her long, but it just isn’t something we generally have to do during treatment. She was sweet and gentle, but it seemed that her brain was feeling a little slow that morning.

While Rana was having her eye treated, it was Mara’s turn for training, it didn’t go much smoother. We’ve been working on getting Mara more comfortable with a slightly different style of training, which incorporates holding her trunk. We are at the point where she quickly puts her foot on the bar, and we touch it as if we were doing footwork while she touches her nose to our hand. This day, it took almost the entire session for her to rest her foot upon the bar fully. Once she did it the first time, it was easier to repeat, but it wasn’t typical for her either. Maia didn’t have any treatment that day, but, if she had, it probably would have gone similarly.

From a human perspective, the sun felt fantastic and turned our brains a little melty as well, so the elephants were not alone!

Photo of Maia, enjoying a snack in the sun.

Your ticket for the: Our Sun Zombies