Our Little Spitfire. How Far She Has Come. 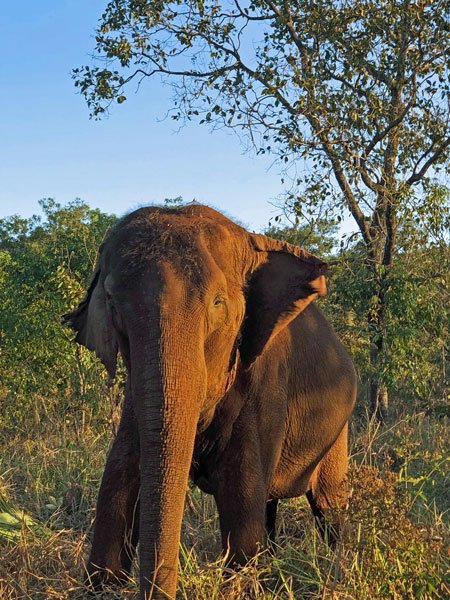 Lady shares space with Rana and Mara at times, and sometimes, after being around them, she will show up at the barn looking exhausted and like she needs some time to herself. When that happens, we usually close her in the smaller yards (around six acres/2.5 hectares) near the barn for the night. The following morning, she is generally bright-eyed with a fresh look about her.

When this recently happened, Lady stayed near the barn for much of the following day. In the afternoon, we showed up around treatment time and started getting everything together as she continued grazing. Usually, she starts heading closer as we start gathering the supplies – particularly her buckets of fruit. Once everything was ready, she was still out there grazing, so we called to her, asking, “Are you ready??” In response, Lady continued grazing for a while.

Thankfully, there’s always something to do, so we kept ourselves busy and kept an eye on Lady at the same time. Eventually, she came over and was very mellow and relaxed.

We did some footwork on her front feet. In general, her feet are continuing to improve. Her foot disease is a life-long condition, and it’s somewhat cyclical. Even with the overall improvement, she still has her good days and bad days, and likely always will. Right now the good days significantly win out over the bad. The visible improvements still give us hope, but we try to walk the fine line between being realistic and enjoying her “wins.”

Her cuticles are showing drastic positive changes. When cuticles overgrow on elephants, they grow into the nail, trapping bacteria underneath. As part of this, the cuticle becomes hardened, which makes it more difficult to trim or improve. Her cuticles are softening and beginning to look healthier. Their softening makes it easier on all of us to redefine the line between her cuticles and nails.

Most elephants don’t enjoy cuticle work, it’s much more sensitive than filing nails or timing pads. In the past, when we file or work on her cuticles, it’s when she’s been the quickest to step back. This day, as we were noticing how far along they’ve progressed, she was stellar about it. She went to slowly pull her trunk back a few times, but she’d come right back on her own.

To us, it’s a testament to her ever-growing confidence, comfort, and trust. For years, she would simply lash out, but now she is pondering a little bit more. She seems to be thinking about the “right” response, rather than responding first and thinking later. She’s learning how to process the emotions and frustrations she feels in a healthier manner. This change is part of the growth for elephants while at Sanctuary. With Lady, because of her behavior when she first arrived, it’s more apparent than many. Her recovery is equally evident and astounding. Scott was talking about Lady recently and referred to how, when she arrived, she was like a little ball of fear, anxiety, and spitfire. It’s incredible to see her doing exceptionally well and allowing us to do more in regards to treating her health conditions. She’s now a more cerebral and content little spitfire.

Your ticket for the: Our Little Spitfire. How Far She Has Come.

Our Little Spitfire. How Far She Has Come.