Other Sanctuary Residents: In Memory

IN MEMORY OF OUR SANCTUARY FRIENDS

Maggie passed away in January 2019 after 17 years of being an amazing guardian and friend.

Maggie was a stray that showed up in the middle of the road in Tennessee and has been Scott’s sanctuary dog ever since. She is now 16 and has always felt Scott’s truck was hers, and sometimes guarded it in a very unforgiving way.

People that knew Maggie from TES remember a dog that used to bait people into petting her belly just so she could nip at them; she never bit just enjoyed scaring people. Those in Brazil know Maggie as an old affectionate pup, hard of hearing and limited vision, but the nubbin is always ready to wiggle.

True to being a cattle dog, we believe Maggie is determined to live to be 18 when we said she will have no rules.

After 11 years of believing he owned Kat, Goomba passed away in August of 2019 after losing his battle with cancer. He is buried under a jasmine bush outside of Kat and Scott’s porch.

Goomba showed up at the sanctuary in Tennessee as a stray when he was about two. He was literally in the middle of our 10 other dogs and when Kat jumped on the four-wheeler to feed elephants, Goomba jumped on with her and Kat has been his human ever since.

He has been a great example for the younger Minnie and Molly when it comes to how to behave around elephants and respecting their space.

Goomba now has early cardiac compromise, along with a new disc issue, so he had to give up his days of running the property and has become a couch dog who spends his time keeping his human company. (Watch → Walks with Goomba)

After years of becoming more comfortable around people, Clyde became ill and was taken to the vet. During this hospital stay, he finally learned to accept affectionate touch. Unfortunately, as he was due to return home, he suffered an episode that left him unresponsive and he passed away.

Clyde Kitty is a stray that we noticed one day by the elephant habitat. Slowly he made his way up to the house and would hang out at the little empty storage building across the way.

Clyde has always been closer with our cats than us humans. He adores Bodhi and they will play together, groom each other, and nap in the sun during the day. Clyde was hurt in 2019, it appeared he got his tail stuck in something and degloved half of it. We brought him to the vet to have most of his tail amputated and have him neutered at the same time.  He stayed in the house during his recovery and did not appreciate his time inside with us.

Over time his acceptance of us has grown, but he still doesn’t allow us to touch him. He will follow us around the yards (the other cats taught him that) and will now come into the house for meals as long as we don’t close the door. The reality is he may never want us to touch him, but that’s ok. He’s a cute man with beautiful eyes who has a low rider belly and is very demanding at mealtimes. We love him just the way he is.

In March of 2020, Frederick laid down for the last time in a small serene pasture by the African habitat.

We will miss his grey muzzle and his morning huffing greetings. Many of you knew of him since we love sharing about all of the residents here. It’s not exactly positive news, but we ask you to try and not be sad- at least not for him.

When we arrived at the property, Frederick was anxious and untrusting. His old owners used him one last time, to round up the cows, and they had to lasso him. He literally tried running through and over people. He had sores from an improperly fitted saddle and scars in different places. He didn’t want to be touched; he simply wanted to be left alone- so initially we gave him space.

Slowly he started coming around, showing interest in the two new humans on the property. We tried numerous different horse treats to help build a relationship, but he didn’t like any of the usual goodies. One afternoon, I jokingly offered him a pringle, and it was the first snack he took from us. It was then I realized he was my boy (I have salt issues), and things progressed from there. Frederick would hang out, outside of the porch, waiting for a snack (we shifted to senior horse pellets), and huff when he saw us in anticipation of something good. It will always be one of our favorite noises. He started allowing us to touch him and began to realize we had no intention of harming him. We let his mane to grow out, and he seemed very proud of his long hair-he carried himself with a new confidence. He went from an unsure, reclusive horse to the big man on campus, who wanted to make sure everyone saw how fantastic he was. 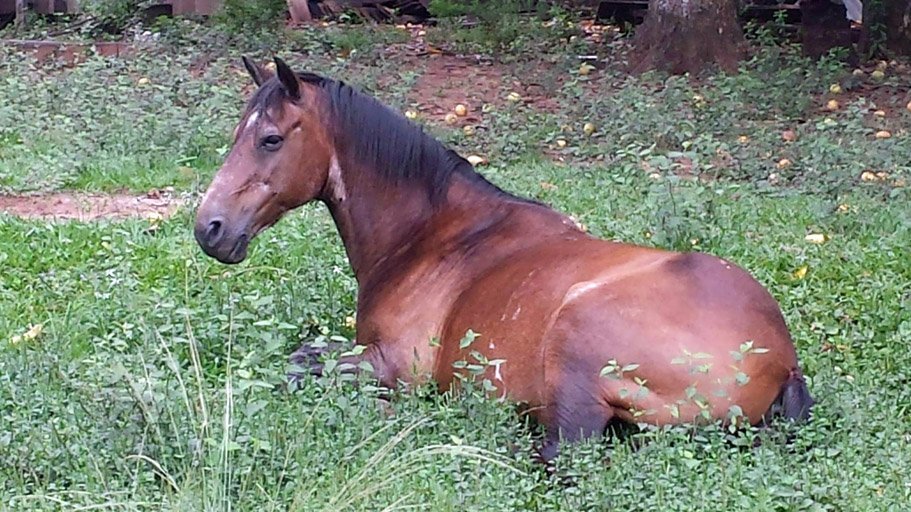 His trust in us grew, and he began to allow us to brush him, to tend to his old sores, and to pick burrs out of his beautiful mane-something he learned to enjoy. We would often do it at the end of the day, and Frederick would fall asleep, bottom lip loosening and becoming jiggly, as we used our fingers to comb and pick through his hair while the sun went down. It was a sweet time for all of us. His mango eating technique was slightly atrocious- he wouldn’t eat the pits, just chew on the mango as juice and bits poured out of his mouth while he made lip-smacking noises. But it clearly brought him joy and made us laugh many an evening when we would go on walks with the dogs.

Frederick owned the property. He knew it better than the both of us, acted as if he was the mayor, but would still come to the house every morning for sunrises and breakfast with Scott. We often saw him throughout the day, especially once the African barn started being built. Once again, he thought he owned the place. But Frederick was an old man. By his owner’s account, he was at least 25 when we moved onto the property, which would make him 30 now. He was grey and cute, but never lost his independent streak, which was fine with us. It was part of who he was, and we didn’t need to change that. We never attempted to ride him; he clearly showed he didn’t enjoy that part of his life. He just ventured the property, grazing on endless pastures, coming for love, care, and food when he wanted, living the ultimate retirement for a horse.

Five years ago, we shyly asked if we could keep ‘the horse’ that was on the property, doubting the old owners would say yes, but we are so glad they did. Frederick was lovely, and trying to help him heal brought both Scott and me serenity to our hectic days and kept our hearts open when we were struggling to find ways to make things work, and at times, felt like emotionally shutting down. Not only was he grounding, but it was hard not to smile when you were with him, and later laugh at the silliness he shared as he began to blossom. Our hope, as is with all of the elephants, is that we can give back just a fraction of what they give to us. We will miss him, but we are not sad for him, we know how lucky we all were to have each other. – Kat

Your ticket for the: Other Sanctuary Residents: In Memory

Other Sanctuary Residents: In Memory