One Step Back. And Two Steps (and four sticks) Forward. 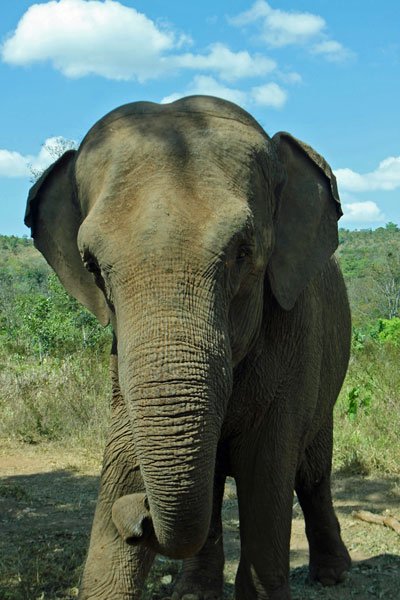 When Mara lived at the EcoParque, her life was different in a lot of ways. One of these differences is the bars that separate her from humans. Here, the bars on the fencing are widely spaced of course, but even in the chute and our training walls, we still have larger openings.

In some ways, what is at the EcoParque is safer for the humans – it was physically impossible for Mara to reach her trunk through any opening to grab or injure anyone. In other ways, it was more dangerous. When the bars are so close together, her humans cannot see her facial expressions, and they can’t visualize subtle shifts in body language. They can’t even see most obvious body language. Our fences, training walls, and chutes are designed so that both humans and elephants can see what is occurring, and each other. This visibility also helps us know when and how to adjust.

While this is a minor difference compared to grazing, trees, and having friends, it’s still an enormous difference. Rana has treatment every other day, and Mara has shown an interest in participating – usually by leaning into the bars or presenting her feet. While Mara is relatively healthy, we’ve begun teaching her how to receive treatment along a fence. While many medical treatments – such as taking blood samples—happen in the chute, a lot of day-to-day treatments occur along the fence line. We do this to minimize the interruptions to the elephant’s days.

Even with the fence between us, or at a training wall, there are ways for the humans and elephants to stand in order to keep things safer. Treatments generally involve two humans. One person is by their head and trunk, handing out treats for cooperating and the other person is doing the treatment. One of the safest positions for the trunk is to tuck it under the lowest bar, so it’s pointed outside the fence and has the shortest reach. The other day, we were teaching that position to Mara. It isn’t an intuitive position, so, Mara was struggling a little to understand what exactly we were asking.

When an elephant (or any animal) struggles with understanding a new behavior, it isn’t their fault or the trainer’s fault – it’s just a communication issue. Sometimes, with communication issues, the best thing to do is to step back and try it again. Initially, Kat tried something with Mara that works with most elephants, but it didn’t with Mara. To get Mara to step back and adjust how she was thinking, Kat asked Mara to take two steps over to a new spot on the fence to try it again. Mara happily stepped up. Kat asked again, with food in her hand, and Mara put her trunk in the correct spot and did it perfectly. She seemed to catch on instantly. Kat asked her several more times, empty-handed, and, each time, Mara did it precisely.

However, this new spot was a little bit behind a scraggly bush, which apparently Mara felt was in the way. At one point, Mara calmly stopped, ripped off a trunk full of branches (around four sticks), and offered them to Kat for a trade. Kat happily accepted, gave her a treat for the sticks, and Mara happily resumed putting her trunk in the requested location.

It was just the most seamless, casual motion. It felt almost like “Hang on <rip> this will make it easier.”

Both Scott and Kat couldn’t help but laugh at how quick and charming it all was. We are pretty certain that Mara has no idea how lovely she is.

Your ticket for the: One Step Back. And Two Steps (and four sticks) Forward.

One Step Back. And Two Steps (and four sticks) Forward.