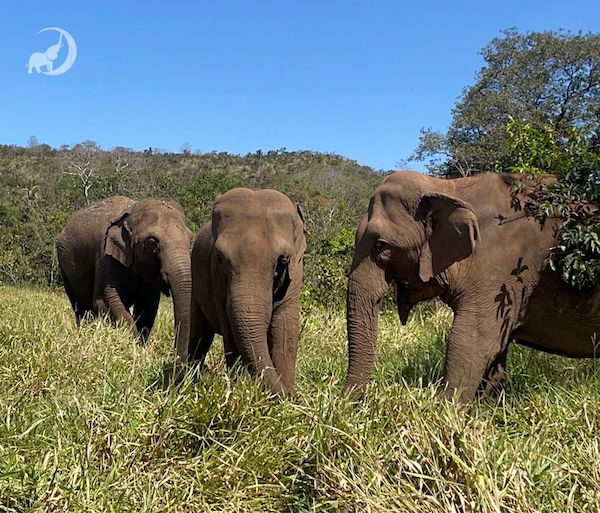 We’ve talked recently about how the elephants seem to be moving around in different configurations during the night, spending time in different places and with different groups than they might during the day. If we go down to the habitat in the later parts of the evenings, we check on the camera beforehand to see if anyone appears to be lying down to sleep; we don’t want to interrupt them if they are getting rest. But sometimes we don’t see any elephants at all. That means they’re further into the habitat and out of camera range. As the nights begin to get cooler, the elephants often decide to spend the evenings sleeping inside the tree line; while it’s not really cold at the sanctuary, the trees do provide extra warmth when trying to sleep.

Pocha starts trumpeting the moment she hears the 4-wheeler heading down the hill, so we can’t be sure that doesn’t stir everyone up and get them moving in new directions. But on this particular evening, as Kat rounded up hay to put out into the habitat for the elephants to find, she drove past Guillermina between Yards 3 and 4, but didn’t hear Pocha coming through the bushes, as expected. Kat could definitely hear other elephants making noise, and clearly Guille could as well, because she rumbled a nice, mellow response to them. Kat headed in their direction to set out some hay for the other ladies. She saw what she assumed was Mara, Rana, and Bambi heading out of the brush.

After putting out hay for the three, she heard some noises coming from another set of trees and assumed it was Maia or Pocha. But, to her surprise, it was Rana, who had been resting in a completely different spot from her friends. The elephants she originally saw weren’t the “Powerpuff Girls,” but were actually Pocha, Mara, and Bambi. Pocha walked over to Rana and Rana gave a cute little excited trumpet; she had happy eyes and put her trunk out to smell in Pocha’s direction in a friendly way. It was a lovely little greeting.

Kat thought Pocha might head over toward where Guille was grazing when she drove back in that direction, but Pocha actually decided to stay with the other three ladies. On Kat’s way back toward the barn, she passed Guille again, who was calmly and happily eating hay – and Maia was walking toward Guillermina. So it seems that nighttime is bringing out the wanderlust in all of the elephants, who are mixing things up and creating new dynamics for all.

Photo of Guillermina walking to join Mara and Bambi

Your ticket for the: New Nighttime Hangouts