We wanted to introduce you to our tiniest new friend and our latest wildlife rehabilitation and release resident. Once he has grown and is independent, we will release him on the property to live his life as a wild deer.

He is an Amazonian brown brocket deer (Mazama gouazoubira). An average adult weighs around 16 kg (34 lbs) and is 1050–850 mm (33–42 in) long. This little guy is approximately six weeks old, so he is significantly smaller. We jokingly call him a “Barbie deer” because he is so cute and tiny that he almost looks unreal. He is very independent and has captured our hearts. We have one other brown brocket deer here who is around four months old. 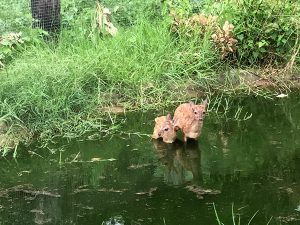 Adults live alone, but these two seem to enjoy spending time together. The little one is very independent; within a few hours of arriving, he began nibbling on grass. In contrast, the older one who has been here for over a month is still very picky with grazing, has just begun eating cut-up food well, and would prefer to stay on a bottle forever.

They were both rescued by SEMA in the aftermath of the wildfires that affected our region. It is unknown if they were orphaned in the fire or separated from their mothers. Regardless, we are very grateful that they were found and turned in to the local authorities and that they will ultimately be released into the wild to live life as they should.

Even though they are tiny, they are still stockier than the much larger deer we are used to in North America. They are tanks—just the tiniest tanks we’ve ever seen!

You can learn more about our Wildlife Rehab & Release program on our website here: https://globalelephants.org/our-wildlife-rehab-release-program/.

Your ticket for the: New Baby Deer Joins Our Wildlife Rehab & Release Program