National Wildlife Day at the Sanctuary 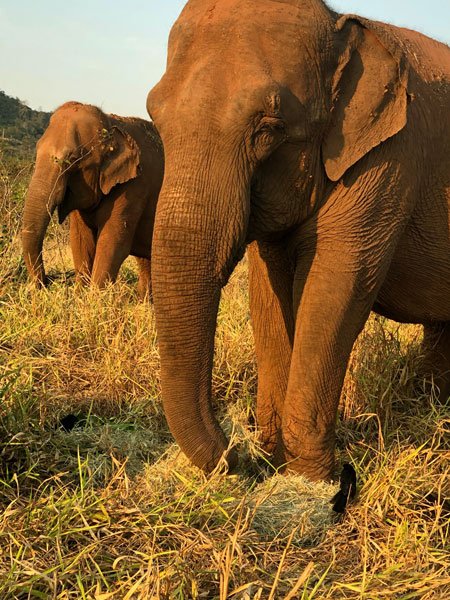 We wanted to share a little about the black birds that are frequently visible in our photos and that most elephants are a bit nervous around when they first arrive. In Portuguese, they’re known as Anu-pretos, and, in English, they are called Smooth-Billed Ani. They’re in the Cuculidae family, which means they are a type of cuckoo. You can hear their two-tone calls in most videos we post, as they are usually near the elephants.

Ani (pronounce ah-nee) live in groups, and, while they fly, they are mostly ground birds. They share communal nests, which means that several pairs together build a nest (males and females both), and all the females lay their eggs in the same nest. All the couples raise the young together, taking turns sitting on the eggs and, later, taking turns feeding the babies. They usually raise two to three broods a year – and incredibly, the older juveniles help raise the next brood of babies.

They mostly feed on bugs, including termites, ticks, and insects. Evolutionarily, they follow grazing animals, eating disturbed insects and fallen ticks. They occasionally remove ticks from other animals (such as tapirs or cattle). We haven’t seen them try to eat ticks off any of the elephants. There are quite a few types of biting insects here, so the elephants seem to enjoy having ani around them.

They’re very sociable birds and are always in a group – if one wanders off too far, it calls to the others until they reunite – even as adults. Ani are beautiful birds if you look closely at them, but they usually show up as black outlines in our photos.

When we lived in Tennessee, we had barn cats, whose technical purpose was to keep rodents away from the elephants’ food.  Their main job ended up being receiving affection and treats from humans.  In Brazil, we have a wild tegu, which is a type of lizard, who has taken up residence near the Asian Barn.  They can grow to be 4.0–4.5 ft (120–140 cm) long. We call him Godzilla, and, since he is wild, we don’t pet him or interact with him.  Tegus eat rodents (among other things), and he does a good job keeping them away from the elephants’ grain.  We always keep fresh bowls of water around for our dogs, chickens, wildlife, and bees.  Since it’s the dry season, he seems to enjoy our water dishes as well.  We rarely see him during the rainy season and will frequently go days without seeing him during the dry, so we always get excited when he walks through.  The wildlife here never ceases to amaze us.

It’s easy to miss – or to forget about – the wildlife around us. Even though Brazil isn’t the elephant’s natural habitat, it’s their home, and it’s incredible to see local wildlife adapt to life around the elephants.

Photo of Mara, with a few ani, and Rana in the background.

Your ticket for the: National Wildlife Day at the Sanctuary

National Wildlife Day at the Sanctuary