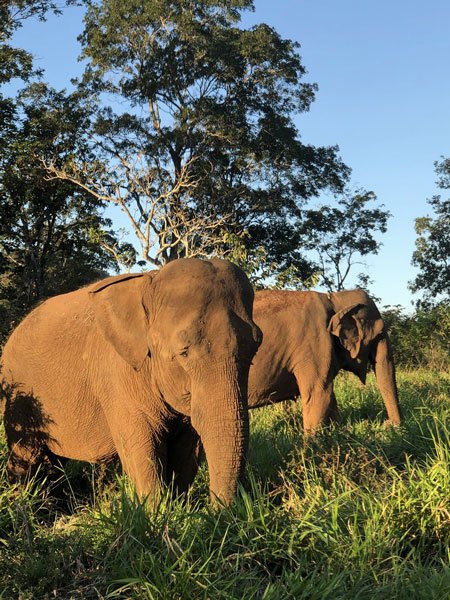 Our post earlier this week mentioned Rana being in a chute to receive foot care, which left many of you asking how we separate Mara and Rana. Like anything new, it’s a learning curve, but now that they understand the process, it goes smoothly.

All of the elephants at the sanctuary, including Mara, need to be comfortable entering, exiting, and spending time in the chutes. While we only use them occasionally, ideally they should be comfortable in them before any issue requiring treatment arises. To facilitate this process, the chutes are the exits to the barn. Any time the girls come and go into and out of the barn, they go through the chutes. This way, the chutes aren’t a particular area we ask them to go into for procedures that might be seen as uncomfortable or new.

The first time we tried to see if Mara would go in the chute, it was easy to separate her and Rana into different stalls. We put down snacks for Rana and asked Mara to come over to the other side while being hand-fed. Once they were comfortable in their spots, we closed the gate between them. With the openness of the barn, even though they were separate, they could still see, smell, touch, and hear each other.

After they were in separate stalls, it was time to try and see if Mara would be interested in going into her chute. Initially, she seemed preoccupied with what Rana was doing. Since there is a chute off each stall, we opened up Rana’s chute for her. Rana is already familiar with the routine and enjoys the food rewards that come with it, so she went into her chute immediately. The gate behind her was left open and we gave her a flake of hay. Once Rana was in that chute, Mara went into her chute right away. Walking in put her closer to Rana and gave her a better view of her, which seemed to be enough motivation for Mara.

Once Mara was in the chute, we gave her some treats and told her how wonderful she was. After making sure she was settled, we closed the gate behind her and continued with treats and praise. Since Mara was doing well, we gave her a general exam, looking over everything from her skin to her toes. When that was done, we opened the gate behind her, and after staying for some more treats, she backed up into the stall. Rana backed up out of her chute, and we opened up the gate between them. This is always cause for a little party, even if the two have just been separated long enough to eat breakfast (they don’t eat in the barn anymore, but did in the beginning.) Many captive elephants seem to enjoy these little ‘reunions’, even if the separation isn’t far or long.

Now that they’ve done this multiple times, and Mara is more confident on her own, the routine is relatively seamless, although there are always exceptions.? Even though Mara would prefer to be standing next to Rana when we do Rana’s treatment, when we ask Mara to enter a chute, she does it comfortably and confidently. It seems she has learned that, after chute time, the two will be together again, and every time they rejoin, it’s an excuse to have one of their joyful parties.

Photo of Mara looking towards the camera, with Rana slightly behind her and facing right.

You can watch Rana move quickly (40-second mark) through a chute in this video below from 2019.  Volume up as it’s an exciting barn party with Maia and Guida, too.  ❤️

Your ticket for the: My Chute. Your Chute.