More of Our Sanctuary Family: Jorgina, Sally, and Milo 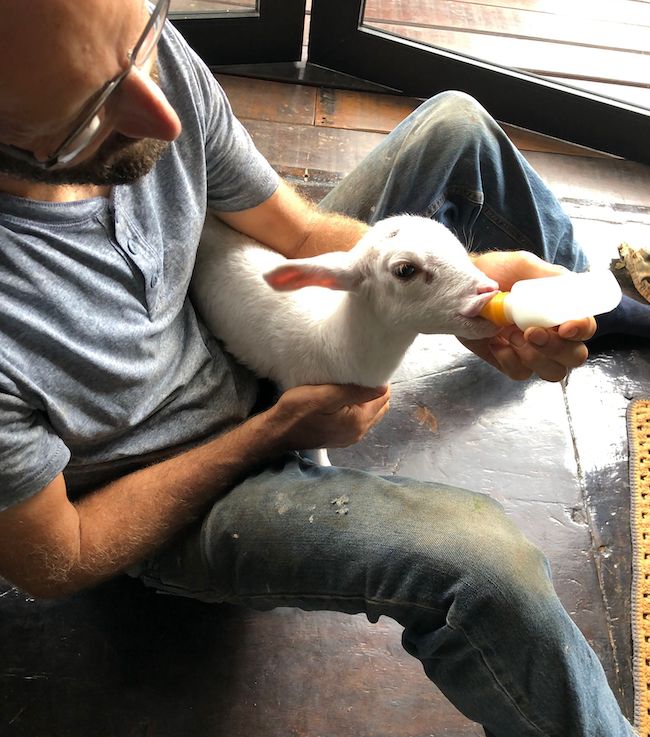 In addition to the elephant residents here at Elephant Sanctuary Brazil (and the revolving door of rescue animals we rehabilitate), we also have cats, dogs, chickens, two goats, and a lamb.

The goats, Jorgina (Jorgie) and Sally, are supposedly litter mates who were owned by someone who sold goat’s milk. Because they were (of course) drinking their mom’s milk, the owner needed to get rid of them. They were both fearful when they arrived, but once we gave them space to run, the two both opened up to us fairly quickly. Within a week, they settled down and became comfortable with their new home and with us.

The two have funny personalities, a little sweet and a little salty. They are prone to jumping on just about anything and we’ve even caught them on top of the truck, looking for something they were decidedly not supposed to eat. Hilariously, they don’t like to eat some of the things they are supposed to, like vitamins or medicine that is made into sugar cubes. When they spend time in their enclosure, Jorgie and Sally both run around, clearing the space of chickens – much to the chickens’ dismay. Both of them love to be around people and everyone here seems to love them back, even when they are being a little ornery.

Milo is a lamb that came to us at 7 days old, after his mother died. He was very sick when he was brought to us, so he spent the first couple months of his life inside. He had to wear a diaper because lambs obviously aren’t housebroken – but he slept in the dogs’ beds and at some point seemed to decide he was a dog. Milo slept on the porch with the dogs and would run with them alongside the 4-wheeler. He didn’t know better; that’s what he thought he was supposed to do, and it was quite charming.

Recently, Milo has been spending more time with Jorgie and Sally. That decision was made in part by the humans because he is not allowed in the house anymore (he’s a pee and poop machine), and also because he started to discover that he had things in common with them. Jorgie is generally not as sweet as Sally, but she has grown to like having him around. Sally took to him more easily, but still likes to chase him for fun; it’s a harmless game.

All three of them will come to the house requesting food, particularly Milo. He still loves the dogs and running with them alongside the 4-wheeler on occasion. Jorgie and Sally now have another herd animal that is part of their sanctuary family, and their relationships will only deepen as they get older and spend more time together.

Your ticket for the: More of Our Sanctuary Family: Jorgina, Sally, and Milo

More of Our Sanctuary Family: Jorgina, Sally, and Milo