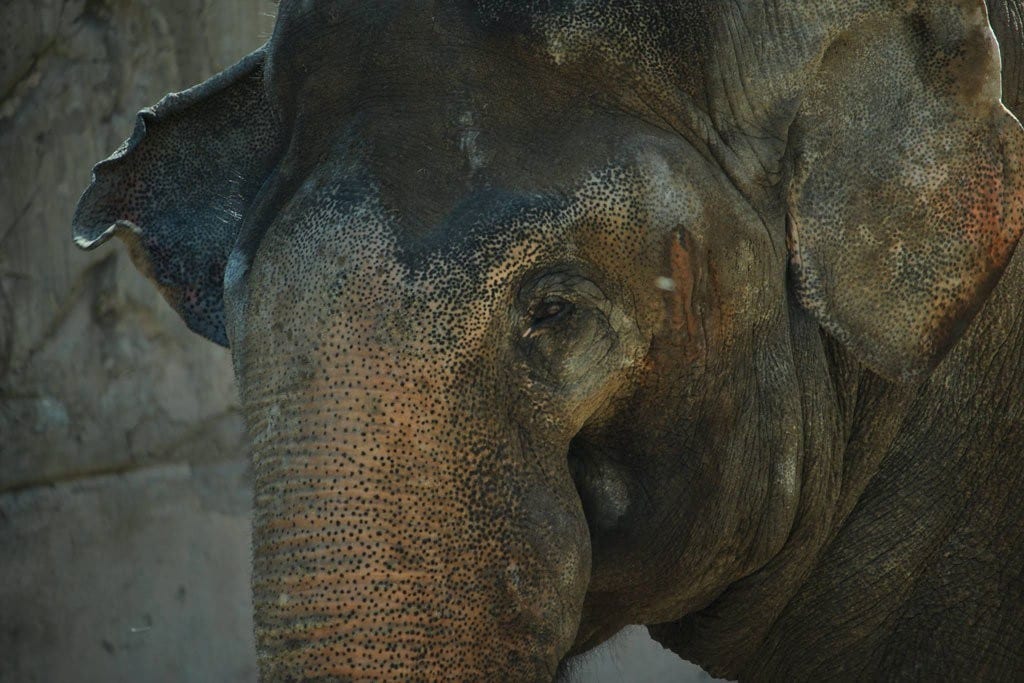 This beautiful boy is Tamy, one of the Mendoza4. He is a tuskless male with small eyes and ears, quiet and a little withdrawn. You can learn more about him here but for now we’re going to continue talking about the rescue of all four Mendoza Zoo elephants.

Our last post we talked about the issues with training and quarantine. Today we’re going to talk about the issues of their enclosures. Both Tamy and the Asian female elephants do have indoor space that is hard to see in many of the photos. Unfortunately, the only way to get into Tamy’s indoor space is through his yard or a ladder built into a cement wall that is in a little space next to his walkway to get inside. As you might be able to guess, this makes it less than ideal to find somewhere to put a transport container in and get it out easily and safely.

Pocha and Guillermina’s inside space is accessible through a door from the outside, but it’s a small human door. What does this mean? It means needing to knock down a wall or reopen up a barred wall in the female area in order to find a way to give them access to the crate that doesn’t take up all of their outside space. Not ideal, but the options are incredibly limited. Kenya’s space will be much easier since it is not a recessed yard and allows much more flexibility.

Working around this obstacle leads into the next post which is a discussion about moving two at a time or all four at once. This seems to be the most delicate of the decisions, but one we’re hoping to give a little more clarity on hopefully tomorrow.

As a side note, the theory behind creating the enclosures at the zoo was way ahead of its time and the thought behind it was positive, the execution, well, that’s something else. This isn’t said in defense of the enclosure in any way shape or form, but from an education standpoint interesting to have learned. The man who created the zoo had the idea that he wanted people to see animals, but not have the animals stuck behind bars. Unheard of that someone would be thinking about the animals’ welfare at that time. This is when he came up with the idea for the design of the zoo that uses a lot of rock walls and recessed areas instead of the cages in use at other facilities.

Nice in theory, but one of the biggest drawbacks is cutting the animals off from life around them. Guillermina was born at the zoo 19 years ago and has never seen the horizon. We’ve never known an adult elephant that has never viewed the outside world. Their rescue is substantial in many many ways.

Your ticket for the: Mendoza4 Rescue Series: Enclosure Issues