Mendoza Mail: What We Know Today 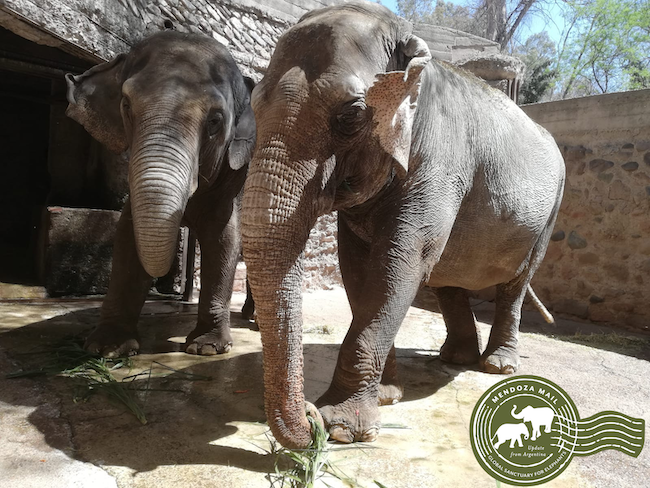 Ingo left Mendoza this week to return home to his family for the holidays. What was supposed to be a weeks-long stay in Mendoza for him, turned into months. He waited to return home to see if moving the girls this month was a possibility, but it eventually became apparent that this would be incredibly unlikely. Dr. Trish also left a few weeks ago, to take care of an ailing elephant she cares for in Nepal. It was a difficult decision for her, as she wanted to be there for Pocha and Guillermina, but the other elephant’s need was more dire. Pocha and Guillermina quickly found a way into both of their hearts and it was incredibly difficult for both of them to leave Mendoza without seeing the girls to sanctuary.

While we would like to have more control over the timing of these situations, we just don’t. We believed that Pocha and Guillermina were far enough along in their crate training that the two could be moved within a couple of weeks of Ingo and Trish’s arrival, but that was not the case. Guillermina was clearly going to need more time to get comfortable with the separation and crates. This was very important, but the delays caused by this have led to permits expiring (they are generally only valid for 6 months) and we must once again rely on the speed of bureaucracy – which almost all of you know isn’t normally fast, and Covid has made things worse.

The initial permit that expired still worked with timing, since Guille was just getting comfortable being all of the way in her crate and needed to get used to the gates being closed. While she was working on building up her confidence, we would have time to renew her permit. But this change in timeline caused the quarantine to become invalid, so it must now be repeated again. There was a very small window to acquire one of the samples, and that didn’t happen, so now another permit will need to be reissued on the Argentina side. Now that the primary hurdle is bureaucratic, the timing of Pocha and Guillermina’s transport to sanctuary is almost entirely in the government’s hands.

Every elephant and every relocation is different. Many elephants have no issues with the transport crate and are ready to go within days. Those of you who watched some of the live feeds we have done before leaving other facilities during rescues have seen that many elephants like the crate, simply because it breaks the monotony of their lives. They also seem to understand that the new people are different and are interested in creating a safe and productive environment. Guillermina wasn’t one of those elephants who took to the crate naturally. We always knew this would be a difficult relocation, as she was born in her recessed enclosure and had no exposure to the outside world or anything new. But this move is her first exposure to what the rest of her life will be like, and we need to nurture her concerns instead of just rushing to push her forward.

This is not exactly what any of us want, but we are still pushing forward with the things we can do. We will update you when there is more news of progress. Once permits have been renewed and initial samples have been collected, we will again start planning a relocation date. This time, we will go knowing how much progress the girls have made and that they are comfortable enough to be moved to the sanctuary and embrace their new life and home.

Photo of Guillermina and Pocha

Your ticket for the: Mendoza Mail: What We Know Today

Mendoza Mail: What We Know Today