Mendoza Mail – The Crates Bring a Change of Pace 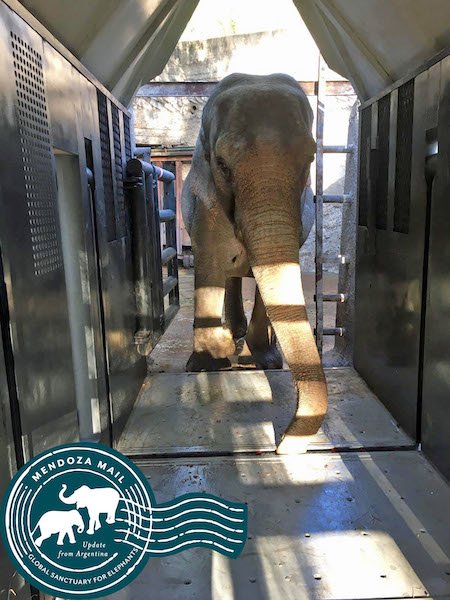 Pocha and Guillermina have had time and space to explore their crates, which arrived several weeks ago. They haven’t fully entered the crates yet, but are continuing to try and figure things out.

We often refer to standard “zoo” style enclosures as sterile, because they frequently bear no resemblance to a natural habitat and are generally free of a sense of life or engagement. At Mendoza, the idea of a sterile environment refers more to the lack of vitality in the elephants’ space. Despite their size and intelligence, captive elephants commonly live in small, boring enclosures without grazing (what little grass may grow isn’t edible from decades of urine), trees, and little to nothing to engage them mentally or physically. Usually, though, the elephants are least able to watch people, watch life go by. They can see birds, squirrels, capybara, or other wildlife outside their enclosure. Pocha and Guillermina’s walls allow them no access to those things. Their life is more cut off from the world than any elephants we have worked with. It’s one of the reasons the Ecoparque Mendoza made the incredible decision to rehome their elephants to Elephant Sanctuary Brazil.

This barren environment means the crates’ arrival was potentially one of the most exciting things to happen to them in decades, demonstrating how much Pocha and Guillermina aren’t used to change. Though this isn’t a huge surprise to us, the arrival of the crates caused a bit of a setback. Guillermina, who was born in and spent every moment of her life in that exhibit, has been distracted since the crates arrived. Their care team is taking these new developments in stride and understand that everything happens on elephant time. We all have our bad days (or weeks), and elephants aren’t exempt from that.

Karissa and Chrissy gave Pocha and Guillermina a couple of days of a break from everything and then started the training process again, slowly. The elephants seem more settled now, although Guillermina is still at about 70% of where she was before the crates arrived.

As we have said many times before – how long this takes is up to the elephants. We can be there to support them, but they are the ones that have to be willing to take those steps.

Your ticket for the: Mendoza Mail – The Crates Bring a Change of Pace

Mendoza Mail – The Crates Bring a Change of Pace