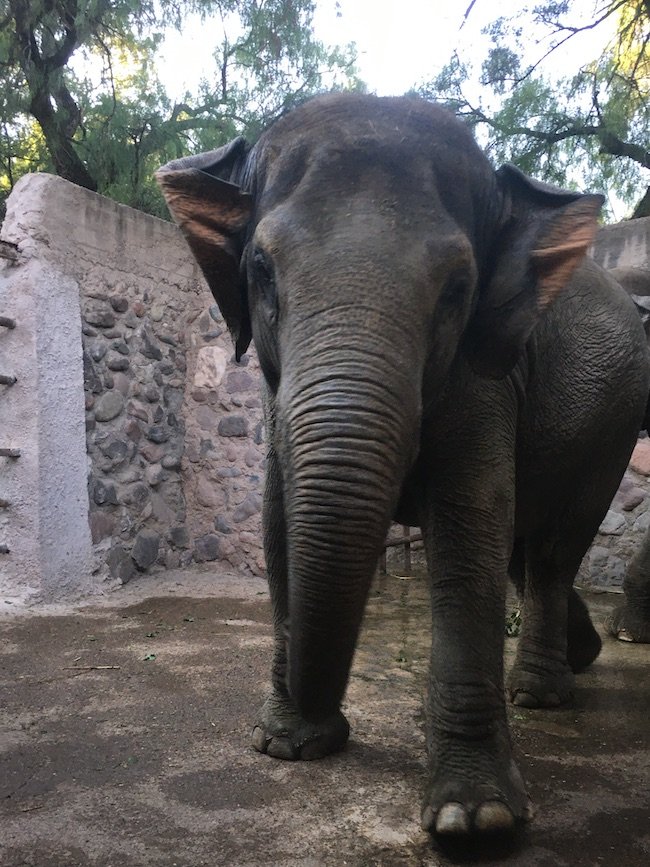 A couple of weeks ago, we posted a Mendoza Mail from Chrissy of Pocha and Guillermina making their silly noises – a series of rumbles, growls, trumpets, squeaks, squeals and my personal favorite, Pocha’s bark. (I call this her sea lion vocal.) Guillermina tries to replicate this, but usually only gets one or two “barks” out until it turns into a higher pitched longer squeak.

Pocha is very vocal, but it is almost always when the two are having their little parties together. Guillermina, however, will make some of her signature sounds on her own, but they are often done with purpose. For instance, if you surprise her, she will sometimes let out this longer, higher-pitched squeak or a couple of short squeaks. She also makes this honking noise, which we most often hear when we are working on separations.

Guillermina will separate great, but every now and then she will let out this honk and Pocha will leave her trainer and go running to Guillermina. Last year, I did a needle stick withdraw on Guillermina’s ear to assist in preparing her for a blood draw, which is required for quarantine. She did great for the behavior and received a ton of special treats, but then suddenly backed up a little, touched her ear with her trunk and let out this super long high-pitched squeak. Sounds are hard to describe in writing, but it sounded something like the whistle on an old-fashioned tea kettle when the water starts to boil (Eeeerrrrrrrrrrrrr). She made this sound for about 30 seconds straight while she held her ear and stared at me. She then went over to her mom for a minute, let out a few short squeaks, came back to me (still holding her ear), leaned right back in and allowed me to check her ear. I guess she decided it was worth it for the extra treats.

Quite possibly, my favorite story of Guillermina’s sounds just happened the other day. Chrissy was working with her at the training wall and I was going to do the desensitization for blood draw, vaccinations, and microchip (all behaviors required for quarantine and transport). Esteban, one of the elephant caregivers here, was working with Pocha on the other side of the room. This main training wall where we were standing is on a slope, and right now it is wet and slippery. In all my times at that wall, I have managed to never fall, but that day I was not so lucky.

Chrissy had just called Guillermina over and was giving her some treats and I realized I forgot something. As I turned to run back and grab it, down I went with a big loud smack as I hit the ground. Guillermina backed up, lowered her head, let out this squeak and then another one and another one. She then left Chrissy, went running over to her mom and squeaked again. Next thing I know, Pocha left Esteban and both Guillermina and Pocha were at the training wall where I fell, intermittently making squeaks, heads lowered, ears out, staring at me.

Once Pocha arrived and both elephants were making noises, Chrissy and I assured them that everything was okay, and we were eventually able to continue with our session – but not before both girls ran back to Esteban to make noises at him as well.

Photo of Guillermina in the training room.

Your ticket for the: Mendoza Mail: Our Expressive Guillermina