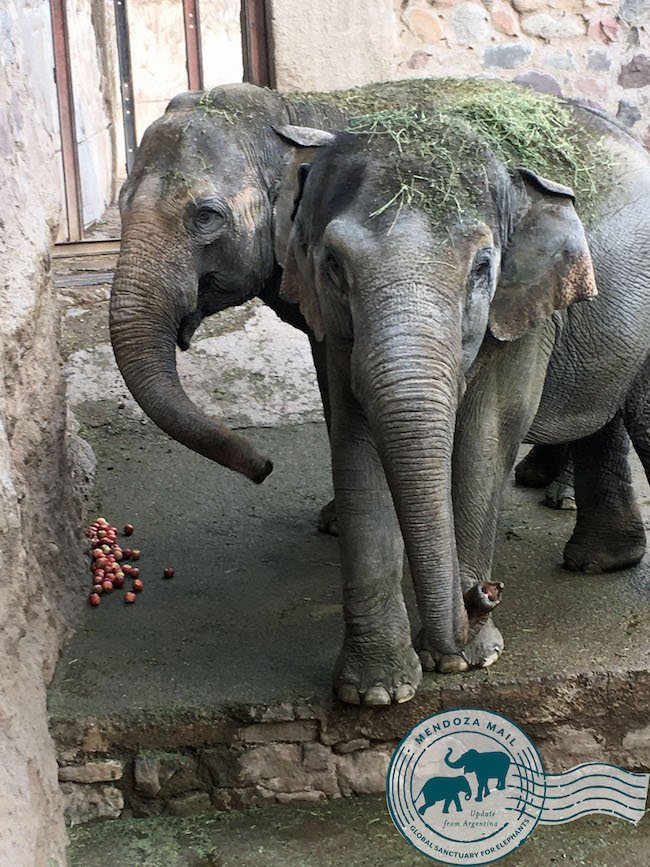 Things at the Ecoparque Mendoza have been a little challenging recently. Training is a process, whether you are training a dog, an elephant, or a child. Even outside of training, Guillermina is complex, due to her limited life experiences and strong-willed personality, which we’ve always been aware of.

Living her entire life in a pit, Guillermina hasn’t had any stimulation, which has created some behavioral problems. Looking at her enclosure and her life, we expected her to have more significant issues than we have observed, which is a testament to what an incredible mother Pocha is. That said, Pocha doesn’t enforce boundaries with her daughter. Guillermina gets away with many behaviors that other elephant mothers wouldn’t allow  under ‘normal’ circumstances. Guillermina can be a bit pushy with her mom. While she isn’t super rough, she isn’t gentle either. Believing that she can do whatever she wants to her mom is a behavior that spills into other parts of her life.

The most challenging part of preparing for the 30-day in-house quarantine required for an international move is often the blood draw. As far as we know, Guillermina has never had a blood sample taken in her entire life (She’s 22). She did well with the training leading up to it and seemed ready for her team to try it with a needle. As is often the case, training for a blood draw and actually getting poked with a needle are two very separate things, which humans can relate to. When the vet tried to draw blood for the first time, Guillermina was really good, but reacted negatively after. She was given a reprieve for a few days, but when they tried again, she had a stronger reaction and became somewhat agitated for several days. Not only was she not completely cooperative with training but, at times, she would block her mom from entering the training area..

After being given a bit more time, Guillermina is doing better. Pocha has continued to be consistent throughout the process. She’s seen life outside the walls of Mendoza, so she seems to understand the bigger picture more than Guillermina. During our many elephant rescues over the decades, we’ve noticed that elephants tend to understand what is happening in a way that can’t be explained. They seem to comprehend that we are there to help and that there is more going on than what meets the eye when a crew of new humans and a transport crate shows up.

Many people describe the same thing when they are helping an injured wild animal – that the animal senses the human is there to help.  While there’s no way to understand their actual perception, they seem to intuit something out of the ordinary is happening. The elephants tend to open up and trust us quickly, and they seem to want to cooperate.  Pocha’s behaviors seem similar to those of many elephants we have relocated, but Guillermina’s limited life experiences aren’t helping her see the bigger picture.

This process will continue to be complicated because Guillermina’s life has been so limited, but this is just part of their journey. We knew these sorts of challenges were a possibility, and we will continue doing our best, adjusting to her needs, and doing what is needed to bring them to sanctuary.

Photo of Guillermina facing the camera, with Pocha just behind her

Your ticket for the: Mendoza Mail – Guillermina’s Progress and Challenges