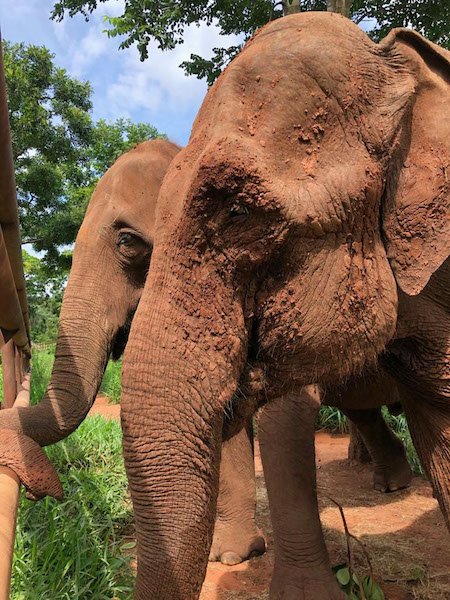 Most evenings, Mara stays out in the habitat all night, but many nights she shows up at the barn for night feed. She generally dictates where Bambi and Rana go. More accurately, she goes where she wants, and they usually choose to follow her. If Mara feels like hanging out by the pond for a few days, that’s where the other two seem to be. When she decides it’s time to go somewhere else, that’s where all three go. Mara is generally in the lead and walking at a faster pace when she’s on the move. She’s not quite Bambi fast, but she moves quickly enough that Rana has to hustle to keep up.

On the nights they show up at the barn for night feed, they usually get there around the same time we do. Sometimes, they are walking up as we arrive, and other nights, we hear them approaching as we prep their snacks.

We have settled into a routine for the nights they are at the barn. First, we offer everyone a drink. We like to make sure that Rana and Mara are both well-hydrated – Mara due to her ongoing health issues and Rana due to her age. Bambi seems to prefer drinking out of the hose in general, so she is usually the happiest when we offer drinks from the hose.

Once everyone has drunk their fill, we give Rana and Bambi piles of hay and a couple of palms. Then we open the treatment chute for Mara, and Mara walks right in. We close her in the treatment chute and give her a large pile of food. We also put a bucket of extra produce outside the chute, leaning against the bars. She will dig through the bucket to pick and choose what she wants to eat from it. She seems to have different favorites all the time. Recently, she loved carrots; other time times, it’s squash or banana or pumpkins that she goes for first. By giving her such a large variety of choices, she can find something she likes. Once we see what she is eating and preferring that night, we adjust her next few buckets of food to feature more of her favorites. Once none of her favorites are left, she vocalizes at us to let us know. At that point, we usually give her the bucket with her nightly rice. As she eats her rice, she receives her nightly injection. After her rice, she usually goes back through and enjoys most of the other produce she passed over initially. While she cleans up most of her scraps, she usually leaves a handful of pieces behind. Once she decides she is done, we will give her hay (and at that point, we will give Rana & Bambi a little more hay as well). We offer Mara a large amount of hay – more than she will eat—because we want her to eat as much as she is willing.

She seems to enjoy eating her meals in the chute, and we think she comes back to the barn specifically for chute time. In the chute, she can eat at her own pace without Rana coming over to ‘help.” Bambi will occasionally eye Mara’s food with obvious interest, but, unlike Rana, Bambi doesn’t usually go over and take any.

We’ve tried bringing Mara in the chute for her meals when she is near the barn at other times of the day. Interestingly, it doesn’t work as well. She is more interested in leaving to rejoin her friends during the day, whereas, at night, she seems to enjoy lingering in the chute for an hour or more eating.

Photo: muddy Mara in the front, Rana behind

Your ticket for the: Mara’s Midnight Snack Routine