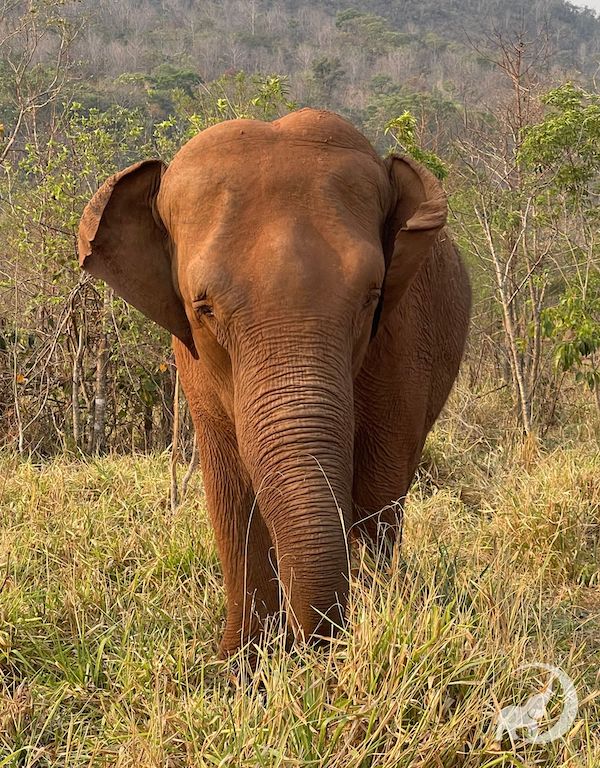 As you know, Bambi and Maia split a good bit of time with Guillermina when she needs to spend some of her youthful energy. They seem to understand her need for companionship, but also are willing to let her be playful – and often play along – when that side of her personality makes an appearance. Because of their established relationships, their growing relationships aren’t surprising to us. However, Mara has stepped up in a big way, which has impressed us in the best possible way.

Shortly after Mara’s arrival, she experienced a bout of gastrointestinal distress, which meant that she was more nurtured by the others than she herself nurtured her fellow elephants. She was also intimidated by Maia and her exuberant energy in her very early days, preferring the calm nature of Rana. Perhaps that is why she did not initially bond tightly with Guille. Like Maia, you can almost sense Guillermina’s energy before she steps onto the scene. Guillermina is charming as can be, but some personalities just click with hers better than others.

Since Pocha’s passing, it seems that Mara has put aside some of her initial hesitancy toward Guille and decided she wanted to take on a more supportive role in her healing. This is not necessarily what we would have expected from Mara, but it is a comfort to see. Somehow, Mara seemed to fall into the role naturally. She was the first elephant to really stay by Guille’s side next to her mother. She’s also been soft and welcoming towards her lately – standing side by side, touching Guillermina and letting Guille touch her in return, something that wouldn’t have happened before Pocha’s passing. It’s nice to see Mara embracing the nurturing side of being an elephant because that is a big part of what we’ve always witnessed from them as a species. It goes to show that, when necessary, even the most surprising individuals can step forward and not only show care and concern, but lead others to do so as well, even when it’s not what you might expect.

Your ticket for the: Mara’s Growing Relationship With Guille