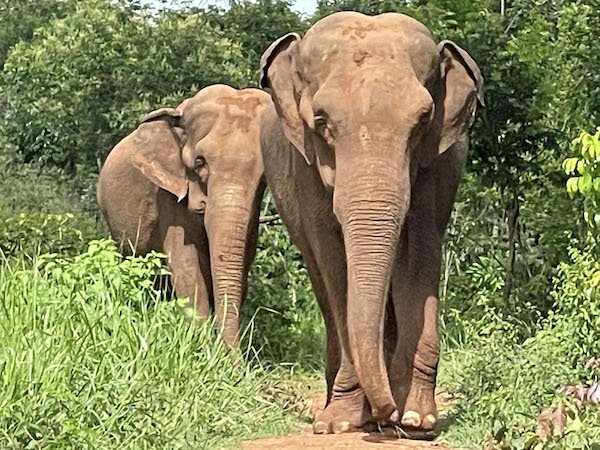 The other night we offered her a cabbage – sometimes she likes cabbage, and sometimes she doesn’t. She took it very gently and curled it inside her trunk. She stood there for about five seconds, holding the cabbage, and then she handed it back to trade it. When she trades an item, she has a bit of an inquisitive expression on her face, as if to ask, “do you want this?” It’s usually accompanied by her little “Errr?” noise, which goes up at the end as if it’s a question. It felt very polite as she gently handed the cabbage back, hoping to trade it for something better.

A few minutes later, while walking down the fence line, she was searching with the tip of her nose in the grass. We weren’t sure what she was looking for, but then her trunk came up clutching a squash. It looked like it had been there for a couple of days, and our vacuum cleaners Rana & Bambi had missed it. She handed it to us, hoping to trade it. In exchange, we gave her the large piece of watermelon that we were already going to give her.

While her squeaks can get her care team to do almost anything for her, it’s sweet that she sometimes hands it back when she doesn’t want something. Rana may feel differently, especially since she loves cabbage so much.

Photo of Mara, heading towards snacks, with Bambi closely following.

Your ticket for the: Mara Trading Up