Mara Says: That Chute Is Mine! 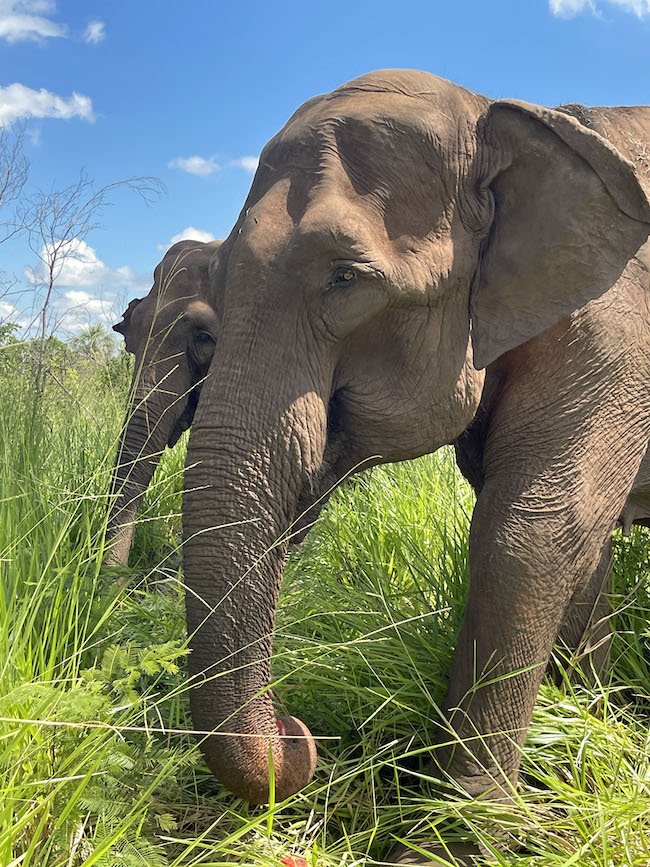 One recent morning, Rana, Mara, and Bambi were all near the barn. Rana has an uneven gait due to her fused elbow, so her feet tend to wear unevenly. This uneven wearing, as well as some nail issues she arrived with, means she generally needs a moderate amount of footwork for a sanctuary elephant. Because of the moisture in the air during the rainy season, pads and nails are softer and easier to work with than in the dry season. With drier months on the way, we took advantage of this morning’s visit and brought Rana into the barn for foot soaks and a little extra care.

Mara wasn’t exactly thrilled with this development. In recent months, Mara has spent many meals in the chute, due to her slow eating and need to ensure she ate well because of her GI issues. She’s now come to associate the chute with special attention, added  affection, and extra food. As part of this, she seems to have decided the chute was “her” space, and she wasn’t excited to see her friend getting the attention, affection, and treats she has come to expect for herself. Especially at meal time. We have several medical treatment chutes at the barn, and it was evident that Mara has a sense of entitlement to them all.

As Scott was setting up Rana with her foot soaks, one of our caretakers, Shirlei, was feeding Bambi. Once Bambi had her food, Shirlei planned to head to Mara to give Mara her one-on-one attention and feeding. Mara became a bit impatient and began repeatedly vocalizing her readiness to eat – almost as if she was yelling for her food.

Everyone had to laugh at her demanding personality. She is undoubtedly an elephant who knows what she wants (everything) and when she wants it (now).

She eventually settled down and was satisfied to eat her breakfast in the yard with Bambi.  Once Rana was done in the chute, she joined the other two, and all three spent the day together.

Photo of Mara, with Bambi in the background.

Your ticket for the: Mara Says: That Chute Is Mine!

Mara Says: That Chute Is Mine!