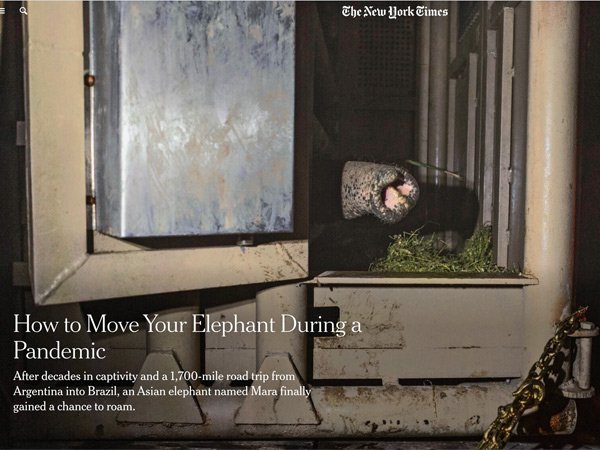 We are very excited to share this New York Times article about how South America came together, against all the odds, to open the borders for Mara’s relocation to Elephant Sanctuary Brazil. Although some of our friends have stated that they wished that GSE was mentioned by name, the highlight was where it should be, Mara, and the unrivaled initiatives of the city of Buenos Aires.

Several years ago, the city managed Ecoparque Buenos Aires convened with a special committee to examine their future. They determined that what they wanted for the animals under their care was not compatible with the foundation of “zoo” philosophy. Irrelevant to their devotion to the animals, and their desire to give them all that was in their power, they knew that the inherent restrictions and confinement of the former zoo did not equate to proper welfare and well-being. The Ecoparque set out to transform their model, closing the zoo’s doors, changing their name to align with their new vision, and actively seeking suitable sanctuaries for the majority of their animals.

The commitment of the city of Buenos Aires to make this transformation is significant beyond possible measures, it is inspirational, and it is the future. Yet, it is not enough for the zoos to change, our society as a whole needs to re-examine how we view the lives of animals, their value, and their happiness. We said it during Mara’s transfer, but it is worth repeating, this relocation above all others was the result of everyone, the drivers, the Ecoparque, the governments of Argentina and Brazil, the photographer whose images brought her transfer to the world and the team of Santuário de Elefantes Brasil, putting Mara’s needs first. All of these individuals and entities could have justifiably said no, the risks were too high in the middle of a pandemic. Instead, everyone said yes, Mara needs this, and we need to make it happen.

Throughout this journey, people reiterated, “together for Mara,” and while at that moment she was the focus, the impact was far more significant. Mara’s voyage to sanctuary elevated the Ecoparque’s commitment to positive change, which led to the City of Buenos Aires signing a decree to donate their two African Elephants to Santuário de Elefantes Brasil. Mara’s introduction to her new life at the sanctuary met an unexpected response from the usually passive Rana and an immediate bond that grows more beautiful with each passing day. And now, with this exposure in the New York Times, Mara’s story and the inspiring actions of the Ecoparque Buenos Aires will undoubtedly open hearts and minds to our global need to give back to these precious beings.

Thank you to everyone who has donated to making “Sanctuary” life possible for elephants and all animals in need. Their future is in our hands; let’s make it one worth celebrating.

Your ticket for the: Mara Makes the New York Times!!!