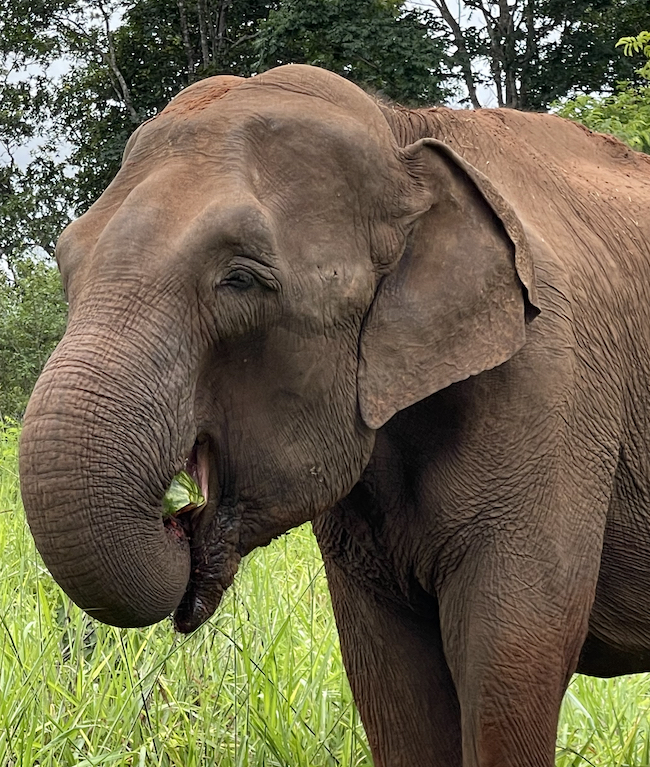 As we are in the rainy season process of doing footwork on all of the elephants at sanctuary, we had a good session with Mara a few days ago. We also got a funny reminder of just how smart elephants can be, especially when it comes to food.

Normally, when working on an elephant’s feet, we keep a crate of food relatively close by. That way, the person who is assisting the caregiver working on the feet can offer rewards along the way. Sometimes that means that after 30 seconds or a minute of trimming, we stop and give the elephant a nice reward for cooperating. They will also get little bits of food during the session, just to keep them focused more on the person in front of them, holding their nose or talking to them, rather than the work being done on their feet.

While working with Ingo on Mara’s back feet, Scott brought the crate of food a little closer than he normally would, because he wanted to stay engaged with Mara. Ingo asked him to look at something, so when Scott walked back toward Mara’s back feet, she grabbed the crate and pulled it close. She then proceeded to stand there with her foot resting on the gate for about 10 minutes, while also slowly snacking on the food. Once the food was gone, her foot came down from the bars of the chute. Of course, this is not how we normally provide reinforcement to elephants, but nobody was going to take Mara’s crate of food from her at that moment, and she was actually quite stellar.

Afterward, Scott and Ingo went back to the normal protocol for footwork, where they had control over the reward system, which reinforces the elephants when they do what is needed. Even though Mara was cooperative during her mini-feast, she could have taken her foot down and simply continued to eat, without participating in the session. Luckily, she was otherwise really charming, and the afternoon went well for all three.

Your ticket for the: Mara Makes Footwork Exciting