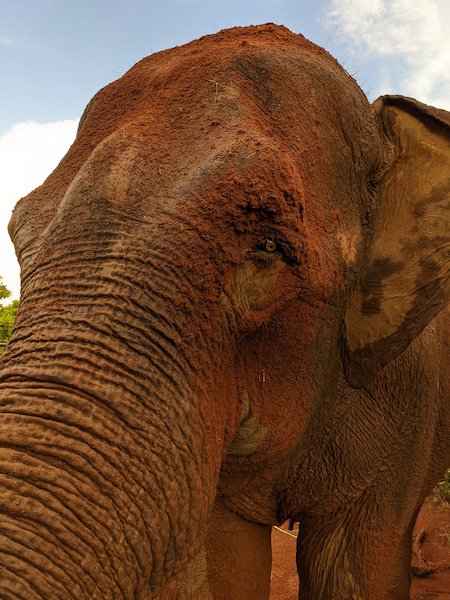 Most of our Mara health updates have been brief: references to her decreased appetite, undiagnosed gastrointestinal (GI) issues, antisocial behavior with Bambi, etc. That is mostly because, aside from the behavioral issues, most updates would consist of ‘today she liked only bananas for breakfast, at lunch bananas were the worst.’ ‘At dinner, watermelon and squash were divine and at 10pm, Maia wanted to eat the world.’ Everything continues to shift, and although her issues remain undiagnosed, we feel there have been enough changes that we can paint a bigger picture. We wish we could provide more answers, but as you know, transparency is important to us, as is keeping our sanctuary family informed. So we want to share with you what we can. Also know, many, many, things have been tried that are not included in this post, just not included in the interest of not writing a book.

Starting in mid-September, while our team was at the zoo moving Bambi to the sanctuary, Kat noticed that Mara was becoming pickier with her appetite and not eating some of the hay she was being offered. Mid-September was still very hot and dry in Brazil, and there was no new grass growing for the girls to graze on. We thought that maybe Mara’s decreased appetite was just because it was so hot (hottest driest season to date), and she was not used to this weather, which is very different at times from the weather she had in Argentina.

Later in September, we noticed that Mara started to show occasional signs of abdominal discomfort and not feeling well, in addition to a decreased and pickier appetite. She would hold her mouth open for a couple of seconds, which can be a sign of abdominal pain in elephants, and would sometimes stand with her legs crossed (which can also be a completely normal behavior). Some days she would be very low energy and was not moving around much while the sun was intense; instead, she would stay by the pond. A little while later, her picky appetite morphed into her having no interest in her grain and liking some foods one feeding and not the next. 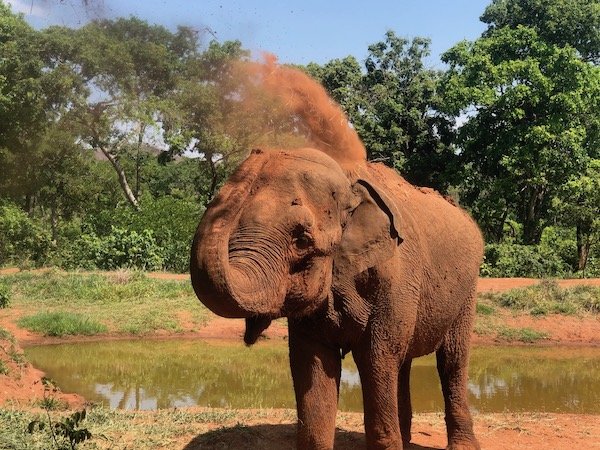 Some possible causes for an elephant not eating well in this manner: colic/abdominal pain, infection, teeth issues, metabolic issues, cancer, ulcers. Some of these have been ruled out, some we are using an appropriate treatment for, while others are simply not possible to diagnose. Elephants and horses are very similar in the anatomy of their Gi tract and with common diseases.  Gi ulcers are a very common problem in horses, and I (Dr. Trish) would guess elephants, but they are not a commonly diagnosed problem. (captive whales and dolphins also get ulcers.) Horses with ulcers show decreased appetite and pickiness (food dropping) and abdominal pain and irritability, (we have also noticed mara being less tolerant with both Rana and Bambi), and muscle/weight loss.

We encouraged Mara and Rana to come back to the barn, from near the pond in yard 4, so we could keep a closer eye on her and offer her more frequent meals and a larger variety. We began cooking rice pumpkin porridge, sweet potatoes, and carrots (which she rarely eats raw ). Due to her signs of abdominal pain, we gave her an injection of an anti-inflammatory medication with antispasmodic effects on the gut, which improved her appetite and any signs of discomfort very quickly. This has been repeated to help with her discomfort and decreased appetite. Initially, it provided her pain relief and a quick return of her decreased appetite for several days. Its effects recently started to only last a couple of days, and the improvement to her appetite was not as substantial.

Based on the significant possibility of a GI ulcer, we started the appropriate medications, but it wasn’t easy to get Mara to take one of them initially. We tried it ourselves, and it is very bitter.  It was offered in everything from frozen fruit juice to jelly sandwiches, cake batter, and oatmeal. She would initially take it one day in something, but then refuse it the next. She is very suspicious of and will inspect her food, breaking it apart if she can smell any trace medicine. The local holistic veterinarian recommended ozonated water, some homeopathic remedies, and other essential oils. We also started acupuncture with the laser.

Another GI medication was added a couple of weeks later when Mara continued to show bouts of abdominal discomfort every 5-7 days. This medication she treated like candy, and gladly took them in her nose and popped them in her mouth. She got into a regular schedule of taking all of her meds for weeks but has recently stopped accepting any oral treatments almost entirely and is now even more suspicious of anything and everything we offer her. Believe us, EVERYTHING has been tried to get her to take oral medications.

Mara has had the strangest, pickiest appetite I have ever seen an elephant have. She usually has no interest in eating in the morning, but as she eats, her appetite improves, and pickiness decreases throughout the day. You never know what she is going to want that day and even how she will want it cut. She continues to be offered a substantial variety of foods on an almost hourly basis. 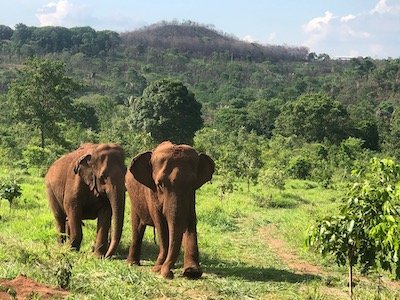 Initially, she was not eating much hay, but we were cutting fresh grass and bringing it to her near the barn, and she was eating all of that. Lately, that shifted, and she only wants fresh grass sometimes, and only if she picks it herself, but will also eat small bits of hay. She still enjoys her pumpkin rice, and she was eating 30-50 kg of changing variety of fruits and vegetables every day. These past few days, it has been mostly pumpkin, squash, pears, and watermelon without the rinds. We are keeping an eye on her weight, and she has lost under a couple of hundred kilograms, but she was overweight upon arrival, so her weight is still ok.

This week, Mara started showing additional signs of discomfort. We have seen her stereotyping (swaying) again as she did in Buenos Aires. This had disappeared quickly after she arrived at the sanctuary, until now. It is not often or throughout her day, but it is something we haven’t seen during her time here. It is difficult to not know exactly what is going on with Mara, but we are trying to make sure we control her discomfort with medications, and a new pain medication has just been added to her regimen.

The difficulty with Mara is we still don’t have an official diagnosis for the cause of her decreased picky appetite. And we most likely won’t.

Although several tests have been run, we are limited diagnostically with what we can do because Mara is an elephant. In a person or dog or cat or even horse, ultrasound, endoscopy, CT/MRI could be done to try and diagnose what is causing her abdominal pain. Available treatments that have dosages and have been used successfully on elephants are also limited. Due to her reluctance to accept anything by mouth, her treatments/medications are also more limited now, and injectables are being used more frequently, which she tolerates with relative ease but usually are followed by her signature squeak.

Right now, we will continue to treat the treatable with Mara. We will continue with her traditional and non-traditional medical treatments.  We continue to offer Mara frequent meals of a wide variety of foods, including live foods (sugar cane, bamboo, banana leaves, and branches from other trees). And most importantly, she continues to spend her time with Rana, spending time at the fence rumbling with Bambi, and still venturing out to enjoy the space that sanctuary offers.

All photos in this post were taken this week

Your ticket for the: December Mara health update