Mara Heads into Yard 4 and Doesn’t Look Back 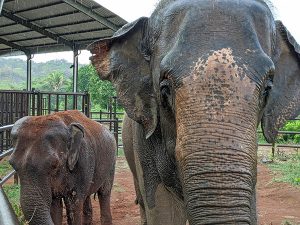 As we recently mentioned, after dinner, Mara & Rana have been heading out into Yard 4 for the evening some nights. One recent evening, as Rana and Mara finished eating their supplemental meal (and as Scott prepared Mara’s second dinner), Mara headed out into Yard 4 at a fast pace. She didn’t look back, so she was clearly in the mood for grazing in larger pastures. Grass should make up the majority of her diet, so we were happy to see her make that decision and put away her additional buckets of food.

When we went down that night for their 10:00 p.m. feeding, we heard a lot of bellowing as we approached. Bellowing isn’t a common noise for most elephants to make. It’s a vocalization that usually means something huge is happening. Although Mara and Bambi tend to bellow (which is like a roar) more than any other elephants we have worked with, we still take bellowing seriously. Once we heard bellowing, we headed directly to check on the girls instead of preparing their evening snacks. We found Bambi on one side of the fence in Yard 3, Rana on her side of Yard 2, and Mara was not around. We assumed the dramatic noises were Bambi, but we were a little surprised to realize it was Rana. Of course, Rana making over-the-top vocalizations encouraged Bambi to make even more dramatic – and louder – vocalizations of her own. Scott tried to record it, but they calmed down as soon as he started recording.

Sometimes, elephants can get separated from their friends in the habitat, and rather than looking for each other, they stay where they are and vocalize for each other. Scott headed to prepare their late-night snacks while Kat went to make sure Mara wasn’t “lost.”

Kat stopped outside of Yards 2 and 3, and shut off her four-wheeler (ATV) to hear if Mara was making noise. Bambi and Mara headed over to Kat. Rana backed up and put her hind foot up on the fence for Bambi, who started smelling and touching her. The two began to vocalize in ridiculous, over-the-top ways. They were all positive vocalizations, but they were very loud. As Kat only has human ears, their party kept her from hearing anything else – including if Mara was calling for her friends. As many of you know, we speak to the elephants in conversational ways, so Kat turned to Rana and Mara and said, “Shh, I’m trying to listen to for Mara!” In response, they both went silent, stood utterly still, and put their ears out. Kat listened and heard Mara moving in the distance. It sounded like she was heading their way.

Kat turned the four-wheeler back on to help Scott prepare their late-night meal. As soon as the four-wheeler turned on, Bambi and Rana became so excited again, vocalizing in silly ways. By the time Kat made it back to the barn, Mara’s squeaking had joined the party at the fence.

Based on what we observed and heard, we believe Mara was napping by herself when Bambi and Rana started quietly calling for Mara to wake up and join them. Like the silly, dramatic elephants that they are, it seems like they became louder and louder – and sillier and sillier – as they egged each other on with their vocalizations and play.

Photo of Rana with Mara in the background playing in the mud.

Your ticket for the: Mara Heads into Yard 4 and Doesn’t Look Back

Mara Heads into Yard 4 and Doesn’t Look Back