Mara and Her Refined Palate 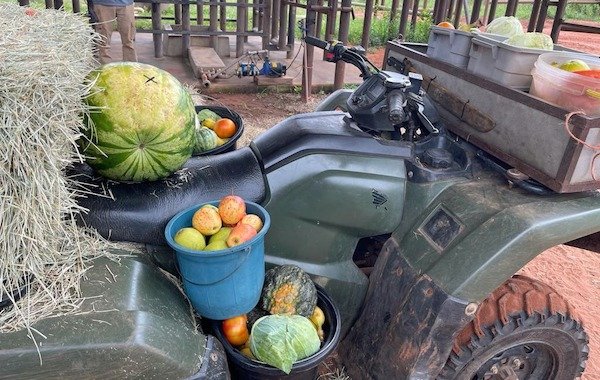 Mara is continuing to eat well, which is fantastic. She still is not eating normally, but she is eating a decent amount of foods consistently. She grazes and eats hay at times, but we are still feeding her a good bit of produce daily.

We try to get her to eat several buckets of food at each meal. This picture of the loaded 4-wheeler is just breakfast, which is one of her smaller meals! Two of the grey (stacked) buckets are for Bambi, and one is Rana’s, but the rest are all Mara’s.  Each of the black buckets holds approximately 15 pounds (7 kg) of produce.  She generally eats between 100-130 pounds (45-60 kg) of produce at night feed, the meal when she usually eats the most.  As an elephant, the bulk of her diet should be grass and hay. She isn’t eating quite enough of those items, so we give her significant amounts of supplemental produce to ensure she eats enough.

We’ve been building a walk-in cooler for the elephants to prepare for more arrivals. With Mara’s diet, we are extra grateful we will have additional space for her food soon.

She is still a selective eater – some days, she wants her apples whole; other days, they need to be in half. Some days, she will eat a banana if we give it to her; other days, we need to peel it for her. We feed her cooked rice daily as well, and sometimes she likes to start with her rice and watermelon, and on other days, she won’t eat her rice until the end. Most elephants – including the rest of the ones here – will eat pretty much anything you give them in any order.

We are beginning to observe her eat hay with “normal” size mouthfuls at times rather than her small dainty bites. These large bites make us very happy – hay is the quickest way to put on weight.

At one recent meal report, Mateus laughingly said, “Mara ate everything except the 4-wheeler and buckets!” That day, he cut grass for her outside the fence and handed it to her, and she delightedly ate it.  It’s the same grass that grows on her side of the fence, but it’s always tastier when someone else feeds it to you.

Your ticket for the: Mara and Her Refined Palate

Mara and Her Refined Palate