Mara and Bambi Together Again 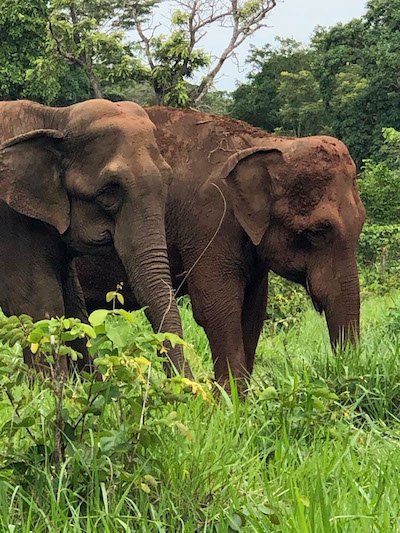 We opened up Yard 4 for Bambi while Mara was in the back of the yard, near the mud wallow.

As many of you may recall, Bambi and Mara did fantastic sharing space at first, but then Mara began acting out toward Bambi. In response, we separated the two. They got along very well along fences, so we’ve tried allowing them to share space again twice, but, each time, Mara would act out toward Bambi.  They’ve had more physical space. Additionally, we’ve given Bambi a lot of time with Rana to help Bambi learn basic socialization skills.  We wanted to try to two together in a larger yard, hoping that, with more space, Mara would behave more appropriately.

We hung out near Mara so that we could observe the two together.  In a little under an hour of being in Yard 4, Bambi saw Mara at the mud wallow.  There was a big trumpet and rumble fest, and, once they settled down, they were both very calm and relaxed. They gave themselves a nice coating of mud, and it seemed to go well.  Rana was near the barn during their meeting but has access to Yard 4, so the three may meet up at some point.

Your ticket for the: Mara and Bambi Together Again

Mara and Bambi Together Again