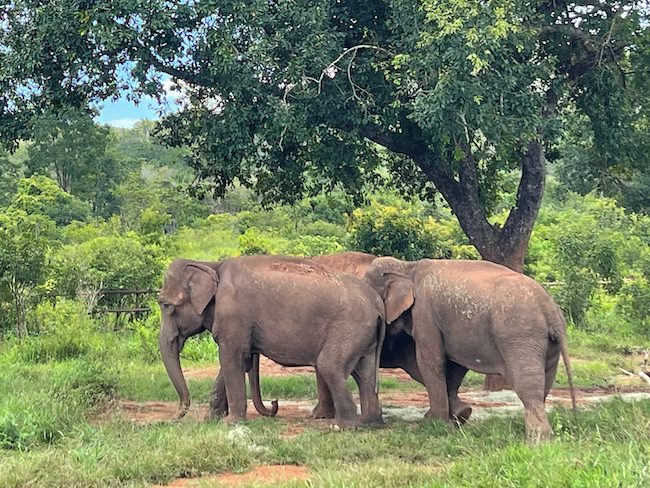 Mara continues with her “two steps forward, one step back” process of dealing with her current gastrointestinal issue. After her initial two days of improvement, the next morning her progress changed direction. The distention in her abdomen was slightly larger, her discomfort more present, and her appetite waned. It’s in those moments that you are reminded how fragile elephants are, even in all of their strength and resilience.

After initial reluctance, she entered the chute to allow us to poke and prod. Elephants do seem to form connections with sometimes uncomfortable things we need to do to them, causing them to feel better after the fact. It’s a realization that helps elephants like Lady grow in their trust of initial footwork and care. Mara is a little more stubborn about things, but it is one of the charming parts of who she is.

Toward the end of her treatment, she began to perk up a little bit, although the day as a whole was not as good as the one before. We discuss our elephants’ health with elephant vets from around the world, taking advantage of the different experiences and vast knowledge that many will readily share. One of the common denominators with Mara’s condition since things first started is the phrase “it just doesn’t make sense,” and we’ve learned that is also part of who she is. Her behaviors, symptoms, and responses to medications don’t generally fall into the norm, so there is always a little bit of an extra challenge involved with her.

Thankfully, we saw Mara on the camera bright and early, waiting to be let into the barn area, with a belly that didn’t look as distended. She generally only comes that close when she is ready to be fed, so both were a good sign. Her abdominal distention has decreased a bit and is also not as tight as it has been. It has also traveled further down, which we are also choosing to take as a good sign. Her appetite was better, although what she wanted was more specific. She did discover her oral medication in her cooked pumpkin the other day, so she has now decided that pumpkin (at least temporarily) is heinous. (Bambi appreciated her leftovers.) So now, she is stubbornly searching everything that is offered to her for contraband. So it goes.

As we mentioned before, Mara isn’t out of the woods yet. On her bad day, she wasn’t just low energy; she seemed tired to the core. That moment has passed, but we know that these episodes can be really rough on sweet grandma elephants. She is still fighting to get better, so we will continue to support her. We have just noticed that she is banging on the chute gate to be let in – which means, even though it’s 30 minutes early, Miss Mara is ready for dinner. Gotta love her.

Your ticket for the: Mara – A Health Update