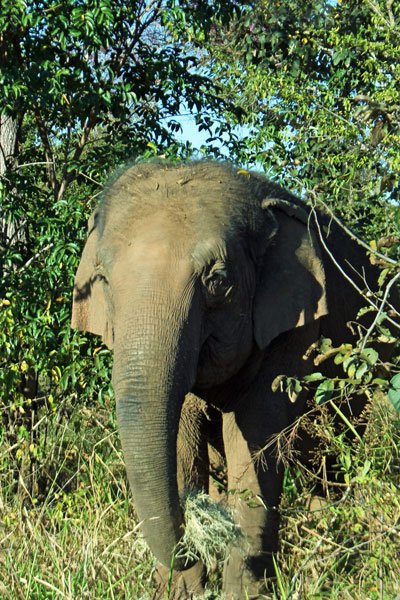 Captivity changes elephants. Even once they arrive at Sanctuary, they can still struggle with complex thinking, problem-solving, and long-distance communication. These skills tend to improve with time, but they don’t seem to develop to the same level that wild elephants are known for having.

Maia seems to have a skill that is unique among most of the captive elephants we have known—the ability to find the others. It’s a fundamental skill of wild elephants, but it’s often lost in captivity as there is no reason for it in a tiny enclosure or a circus tent.

We have worked with other bonded elephants (all female Asian) who would lose each other, sometimes when one of the two was sleeping, other times when someone wandered off unnoticed. They would still be relatively close, but they would walk in the wrong direction in search of their friend. Instead of stopping, calling, and then listening, they would venture off. One pair literally had one elephant around the corner of the barn from the other, out in the yard, and they still couldn’t find the other. It is not a secret that captivity strips away different facets of who an elephant is, but it is sometimes surprising to the degree it happens.

Maia and Guida had an incredibly deep bond, but they didn’t spend all of their time together. Just like she does now, Maia would wander off, as would Guida. It wasn’t surprising to go out to feed and sometimes find them in different corners of the habitat. They spent a lot of time together but were also very independent elephants.

Maia, somehow, seemed always to know where Guida was. When feeding, it can take us a while to find all the elephants and deliver their food. There were times we would find, and feed Maia first, and then spend a bit looking for Guida. She was always good at finding little hidden spots and not food motivated enough to come to the four-wheeler for dinner. On occasion, when we found Guida, Maia would have already finished her dinner and beaten us there. That means Maia wasn’t following the loud 4wheeler but was using other methods to find Guida and making a beeline to her.

Even now, when Maia shows up near the other elephants, it seems intentional. Whereas the others often seem to stumble upon each other’s locations. As we mentioned in a post the other day, Mara didn’t realize Maia was nearby until she had walked up. That simply isn’t something that Maia would miss. With all the quick visits Maia makes, it’s a useful skill for a social butterfly to have.

Your ticket for the: Maia’s Unique Ability