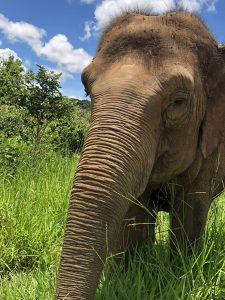 As we discussed in yesterday’s post, Maia encountered Bambi, Mara, and Rana in the habitat and didn’t react as expected.

After Maia took off down the fence, Scott followed her on the 4-wheeler. As wild animals, captive elephants retain a “flight or fight” reaction, and Maia seemed to be experiencing a “flight” moment. Because she was in no actual danger, Scott wanted to encourage her to stop and think before continuing to respond entirely on instinct. Once Scott caught up with her and got her attention, he gave her some snacks along the fence. Just like with humans, eating can be very comforting to elephants, and it causes them to pause.

As we mentioned yesterday, despite her big persona, Maia is a little insecure at times and is possibly our most sensitive elephant. As she walked off, we knew she was fine, but we were concerned about her emotions. Scott spent some time near her while she settled down and started eating her hay.

Maia’s food was inside the fence – Scott tossed it through the fencing to give her space if she wanted it. She walked past her hay to Scott, looking for affection.  She leaned into the fence, for a comforting touch while she ate. (It’s Maia – so food came first!) Scott held the end of her trunk and scratched her ear.

Because we are a protected contact facility, we are frequently asked if we are affectionate with the elephants. Our standard response is that we provide affection when the elephants solicit it, but they aren’t always interested in it. They generally would rather spend time with their herd mates than their humans, which we prefer – they are here to be elephants, after all.

Something that we like about protected contact is that it ensures interactions are on the elephant’s terms. Through their lifetimes of captivity, elephants are conditioned to accept human touch. They frequently have people approach and touch them without paying attention to their signals or needs, so they learn to tolerate unwanted touching. For many elephants, this learned behavior begins when humans use dominance-based control methods on them at a very young age. If the elephant pulls away from a stranger touching them, a bullhook brings them back. Even under different styles of management, this learned behavior often remains. They learn to tolerate unwanted touch, not only to avoid punishment but to earn food rewards.

When you switch to protected contact management, the decision to be touched is truly up to the elephant. With Maia’s food entirely inside the fence, she could have stayed a few steps away. Because she approached the fence despite having food in her space, Scott knew that she wanted to be close in that moment. When humans are in their space all the time, it’s harder to tell what the elephant actually wants, especially since they are conditioned over decades not to step away when approached. It was indeed her choice – and her desire – to be touched and reassured by Scott. Once she felt sufficiently comforted, she stepped back, and the encounter ended.

Our time working with elephants in both free-contact and protected-contact scenarios has helped us see how working through a barrier can deepen our relationship with the elephants. The humans here love and adore each resident elephant, but it’s their home first. We are the guests, and they are allowed to make their choices; everything – including whether or not they are touched – is on their terms.

After a bit of affection from Scott, Maia seemed tired, but she also seemed lighter in spirit. She didn’t appear overly concerned by her recent encounter and was happy to settle down and eat some snacks. After she finished eating, she wandered off into the bushes.

She ended up meeting with Mara, Rana, and Bambi a few hours later, and we will share that in tomorrow’s post, the third post in this series.

Photo of Maia taken along the fence after she solicited affection from Scott.

Your ticket for the: Maia’s Unexpected Excitement Part 2: The Story Continues