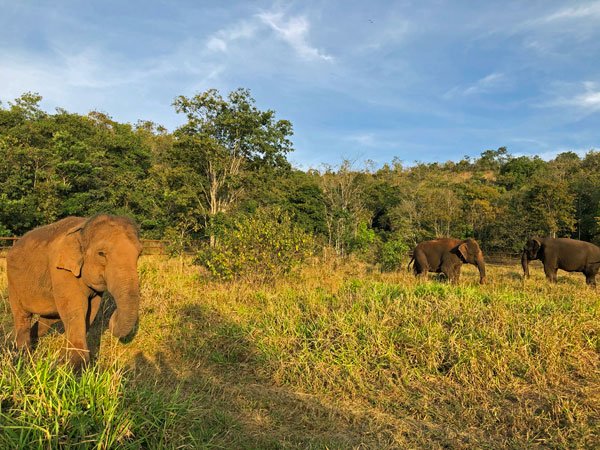 Early one day, Rana and Mara were ankle-deep in the pond when Maia showed up. Mara started vocalizing, and in response, Maia stopped. She turned her body around and pointed her rear towards them in a submissive gesture. It seemed to be clear communication that she was listening to Mara’s reaction, realized Mara may not have been completely comfortable with her approach and adjusted her behavior in response. It would be normal behavior for Mara, Rana, and Lady, but it was not something we usually see in Maia.

Around dinner time that same day, Scott was giving Rana and Mara a drink from the water hose along the fence when Maia showed up. Mara was so focused on Scott and the water that she didn’t see Maia until Maia was very close. Mara seemed a little caught off guard – she made a little noise and turned to the side a bit. Maia walked between Mara and Rana, very gently and slowly. She reached with her trunk and gently touched Mara’s face. Mara just stood there for a minute, and then backed away and made a little trumpet with big eyes. Maia then reached over and gently touched Rana’s face. Again, it all seemed sweet.

Maia started playing in the mud, and Mara moved behind Maia. Mara still had big eyes, but she seemed to be working up the courage to walk between Maia and the fence. There was enough space for her to fit, but it would be a vulnerable position for her to be in, so it required her trust in Maia. She almost did it but stopped about two feet away. There were lots of rumbles from everyone.

After a little bit, and after the moment had passed, Scott went to feed. Scott had all of their dinners piled on the 4wheeler, so he assumed Maia would come first – she is the fastest and most food motivated. Maia waited, and let the other two go ahead of her. Mara ended up taking the lead, with Rana second, and Maia behind them. Maia wasn’t being pushy and was slowly walking around 15 feet (five meters) behind them. Mara was a touch faster than usual, but everyone seemed very calm and relaxed overall.

Scott got everyone settled on their dinner somewhat near to each other; then, he stayed to observe a little bit. Maia is a fast eater, so he gave her a few extra palms and hay to try to keep her occupied if she finished first. Once Maia finished her dinner, she stayed there quietly, eating her palms, without checking out everyone else’s food. Maia does love food, and this shows she is becoming more conscientious. She could have easily eaten her food quickly and then helped herself to Mara or Rana’s dinner. Indeed, even Mara and Rana do that to each other sometimes, but Maia did not. She stayed where she was until they finished eating, and then she walked over.

It would’ve been easy for us to lead Maia further away from the other two to eat. The distance would have mostly eliminated the chance that she would take their dinner, but that wouldn’t have been of service to anyone. It’s easy for caregivers to go out of their way to protect those they love and to be overly cautious in avoiding certain situations. That isn’t fair to the elephants, though. We have to give Maia a chance, and so does Rana and Mara. Just as importantly, Maia has to provide herself an opportunity to grow and evolve. It’s not about the growth of an individual elephant, although it’s an essential part of it. It’s about the growth of all of them together. That’s what a herd is.

Your ticket for the: Maia’s Growth