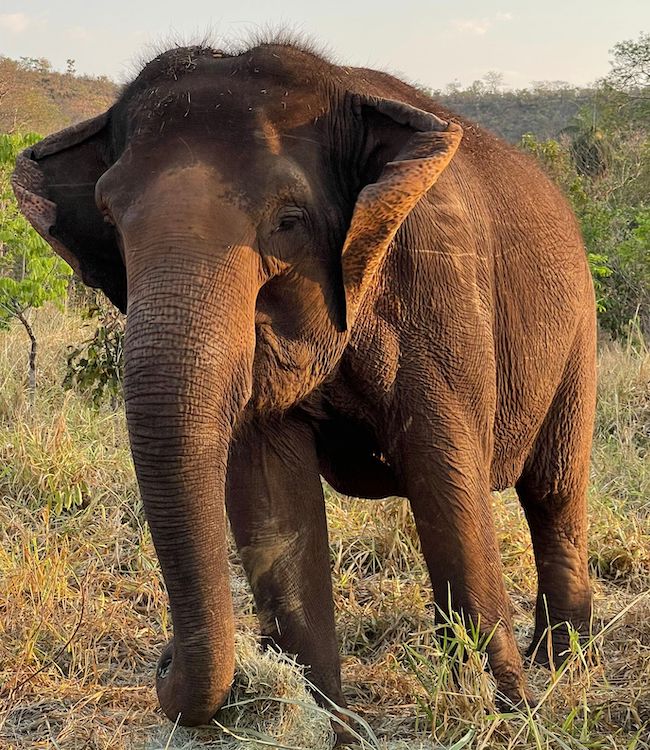 It is both promising and fascinating to see Maia approaching Bambi, Mara, and Rana lately and how she has chosen to go about the possibility of building relationships. The dynamics between each individual elephant here at Elephant Sanctuary Brazil are complex and those intertwined relationships impact how the herd functions as a whole.

Maia’s bullying toward Guida prior to sanctuary came from a place of insecurity. She didn’t want to be hurt, so she was aggressive in order to protect herself emotionally. Once the two of them  arrived at Elephant Sanctuary Brazil, Maia began to open herself up to Guida and take a more submissive approach to friendship.

When Rana first arrived at sanctuary, she did not know how to socialize within the boundaries of Maia and Guida’s close relationship. Maia and Guida were not necessarily welcoming to Rana because Rana didn’t understand that her approach might not be appropriate. Rana would try to physically step between the two of them and got pushed away by both Maia and Guida a few times. Eventually, the three became friends, but Maia and Guida were so bonded, and Rana was so pushy with her affection, that it took a while for them to find their way.

After Guida died, Rana built a stronger relationship with Maia by taking Maia’s needs into consideration and ensuring her friend had a support system; she would allow Maia to make the first move if Maia needed comfort and would respond based on what Maia seemed to want at the time.

Mara had some slight concerns about Maia from the beginning. When she arrived, she might occasionally take a few steps away from Maia, often preferring that there be a bit of physical distance between the two of them, though there was no sign of aggression between the two. Maia may have been giving off a strong energy as a way of masking her insecurities from a new individual, just as she had done years before with Guida. Eventually, their relationship strengthened, but Mara always favored Rana over Maia.

Since Bambi’s arrival, Maia’s energy has changed considerably. She knew that Bambi was protective of her new friend and did not want to cause a confrontation. Rana, in her position as a uniter, may have given off a subtle energy of hope that Maia would like this new friend of hers. As you know, healing is not linear and every elephant at the sanctuary is always at a different place in her journey.

Now that Bambi is beginning to settle, the dynamics between Maia and her may be subtly changing. Since Rana’s overriding nature is to welcome and teach, she may feel that it’s time to help open the door to Maia joining their group of three. The four of them seem to be working through their complicated feelings toward each other, and is it encouraging to see Maia become a little braver by coming closer to them. It’s also nice to see that Bambi doesn’t feel as much of a need to jump to Mara’s defense when Maia walks close. Changes occur over time, but this evolution of theirs is a lesson in relationship dynamics.

Your ticket for the: Maia’s Emotional Path