Maia was a thinking girl today, and it made us all very proud (including her.)

Foot work and training aren’t exactly the first thing that pops into people’s mind when they think about sanctuary. Especially in the beginning of an elephant’s journey at sanctuary, these two things are very important. We would love nothing more than if when elephants arrived we could open up the transport container, let them go into the habitat and never have to worry about them. Unfortunately, many elephants arrive with significant health compromise that needs immediate if not long-term care. 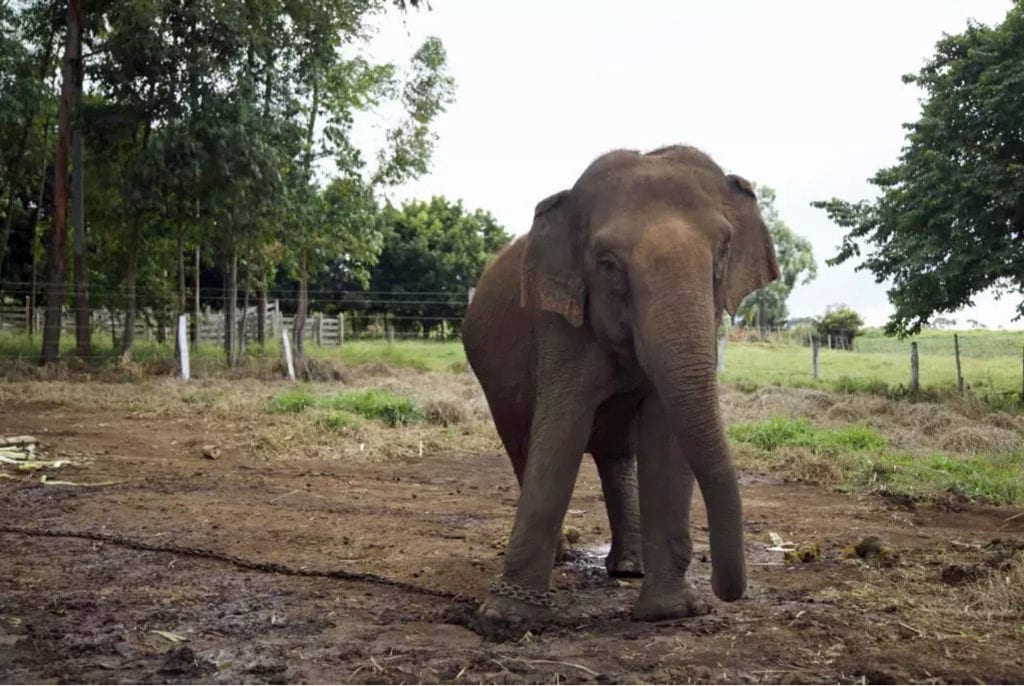 Feet issues will have plagued almost every elephant that arrives at sanctuary. In the case of Maia and Guida, they traveled on circus for decades, but for the last five years before coming to sanctuary they were chained in a very small yard, standing in their own excrement. As you can imagine, this has a significant impact of foot health and is something we now have to deal with. Issues can continue to pop up, due to the way their pads layer, for years- all from their past.

Because of Guida showing immediate pain in one of her feet and both ladies having overgrown nails, we started foot work somewhat immediately-before they were trained to place their foot and do things in the way that makes it easy. Now that the girls are more settled, we’re making the needed adjustments.

Back to Maia….this week we worked on getting Maia to place her front foot on log and her back foot on the gate. The thing about Maia is that she’s a very reactionary elephant. When we visited her at the farm, she was ready to react before anything even happened-she was constantly on edge. That shifted when she arrived at sanctuary, but she was still fast to react with anything, even if her reaction wasn’t negative. Asian elephants are usually very grounded and cerebral, but Maia wasn’t stopping to think about anything- she just did.

When we initially did target training with Maia, she wasn’t really trying to figure out what we wanted her to do. She just did some things incidentally and gladly took her treats for it. She was going through the motions. We’ve done some work on her back nails, but she has never put her foot up on the bars and doesn’t seem to like having them handled that much. 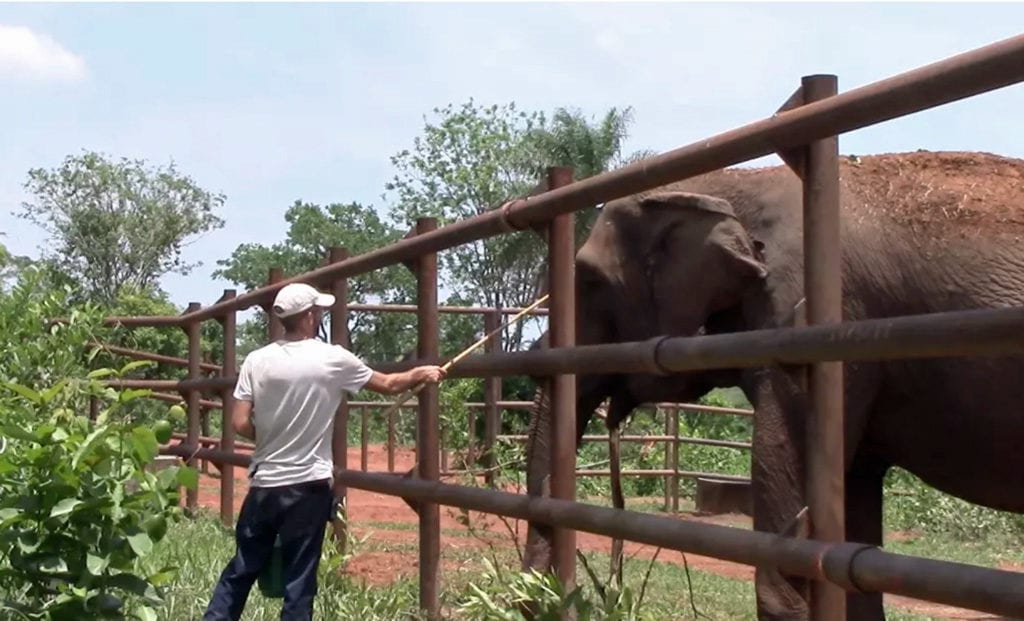 Now, for all of you who think this seems like it should be easy, try getting someone else to perform a random behavior (like rubbing your stomach in a circular motion.) No talking, just whistling when they are heading in the right direction, and praise when they do really well. Please, try it- it’s actually fun but it will give you an appreciation for the effort elephants have to put into learning different behaviors. In the example of rubbing your belly, you would give praise for your friend finally touches their stomach and they might feel like it’s a big accomplishment (after trying to move their feet, jumping up and down, spinning around and anything else they try in the process)- but it’s still not what you want. This sometimes can cause frustration because they thought they understood and had it, but your desire is even more specific than that. So they have to continue to try different things until they get it right. It’s a complex process.

Earlier this week we started with Maia and her front foot. First step is getting her to lift her foot, then needing her to bring it backwards, then placing it on a log and holding it in a way that gives us access to the bottom of her foot and of course, staying there. The lifting went well, the rest was a little harder. This is when ‘crazy foot’ comes in with most elephants- it’s something we’ve talked about with Ramba. It is when they just don’t know what you want with their foot, so they start swinging it around a bit, touching different things, lifting it to different heights, trying to get the praise that lets them know they’ve figured it out. This phase didn’t last with Maia. She stopped, got quiet and started to gently move, trying to pick up on any little notion that she was heading in the right direction. When she got those cues, you could see her stop and think, trying to then figure out if that was ‘good’ what was needed to make it ‘better.’ It was the first time we’ve seen her go to a calm and in depth place of thinking.

Maia did great. She let Scott guide her a bit with his hands and she perfectly placed her foot and held still while he went to work. With her, she’s great once she is where she needs to be. She relaxes and you can usually go until you’re tired or out of treats. That part she has always been a rock star with. Within two and a half days, short sessions after breakfast, we were able to get her front left foot to a good point where her pads now need to grow a bit before we should do more work. She was a total gem; we didn’t even have to ask for her foot. When we would walk up, she would already be lifting it- ready to go. Since she seemed to be making a mental connection with foot work, we decided to move on to her back feet, which she is more reluctant to allow handling of.

These are moments we go into without expectations. We hope Maia makes some kind of connection, but it’s a process and we are more than happy to be patient with all of it. Maia did great today and allowed us to have that ‘proud parent’ feeling we get with them whenever we see them take positive strides forward.

Maia wasn’t as quick to catch on with her back feet as she was her front, mostly because she didn’t want help putting her foot where it needed to go, so she had to figure it out all on her own. She would adjust where she was standing, move up, move back and switch feet, all sorts of things in the process. Towards the end she would have her foot touching the bars, but not resting in a way that would allow her to be comfortable with any lengthy foot work. Because we like to end things on a positive note, we had to decide if we would end it with that or if we wanted to try one more time (since she was so close.) Maia answered for us and shifted the way she does before she lifts her foot to try again. This time she was just inches away from having her toes up over the bar and she allowed Scott to lift her foot just a bit, so it slid perfectly into place, resting comfortably on top of the bar.

That right there is a total woohoo! Good girl! Treat jackpot moment. It’s something we already knew she was reluctant to do, she had to figure it out all on her own and she did so gently and patiently. She’s stellar. And as is typical to her nature, once up there, she relaxed and was perfectly still until we finished up and told her how amazing she was. 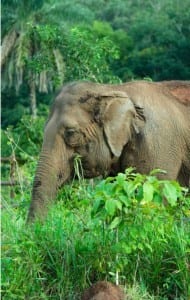 We are thrilled that we are able to work on her feet in this way. Her pads will need the most work after all of those years standing in muck. But what is even better is the confidence that Maia seems to have derived from figuring out what was needed from her and being able to do it and do it well. She was very proud of herself this morning in the yard and it was incredibly endearing to see.

It’s something we’ll have to continue to work on, and of course she has a back left foot as well, which may mean the process starts over again from the beginning. But these are enormous steps for her. Once an elephant begins to stop and think about their actions, everything shifts. We knew Maia was an amazing elephant, even when she stood swaying on chains at the circus farm. She showed glimpses of herself immediately. She has grown so quickly and we couldn’t be prouder or happier for her. Maia deserves to be confident in who she is and to experience all of the joy that comes with understanding how wonderful she is-and she’s getting there.

Your ticket for the: Maia Stops and Thinks