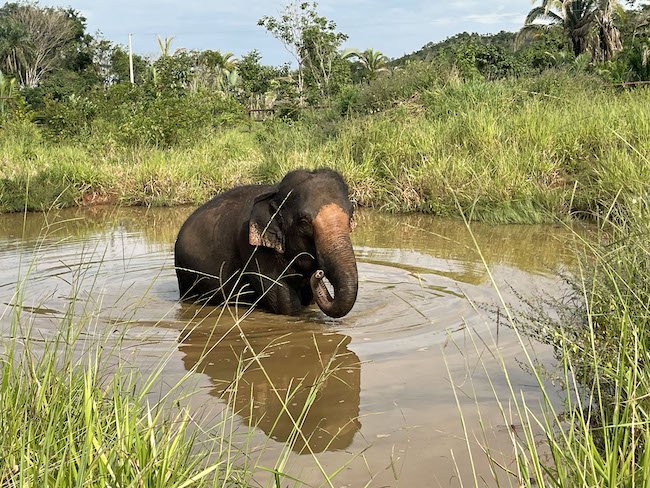 Maia has continued to be on the move – and to be a tank. It feels like every time we check on her, she’s somewhere else. It’s not uncommon to see her in Yard 5, across the creek in Yard 4, and near the back of Yard 3… all in the same day. While we aren’t seeing her near Bambi, Rana, and Mara, we know that she is passing by them throughout the day, just from noting how she is moving around the property.

When Maia is on the move, she isn’t just strolling around paths. She tends to go whichever way she wants to go and, unlike our other residents, doesn’t always pick the easy way. She takes hills like no other Asian elephant we have known. Her “shortcuts” may be a direct line from Point A to Point B, but they sometimes involve going both up and down somewhat steep embankments. It’s impressive. Often, when we watch her climbing hills, we are amazed by the strength and power we see behind her movement.

Her tendency to take a direct path shows she isn’t intentionally avoiding the others, even if it means she isn’t intentionally seeking them out. We suspect that, at some point, Maia will be ready to try to socialize again with them. For now, we are happy to see signs of her passing near them and moving freely around the habitat however she wishes. We don’t hear much commotion or trumpeting as she moves, so we assume that her time near the others is relatively calm. We have also seen that sharing space with the others hasn’t deterred her from pond blobbing. The act of being a pond blob – to nap, lying down, submerged in water – is a vulnerable position. Maia continues to make herself vulnerable in that way, which is a good sign of a certain level of comfort around the others.

Photo of Maia exiting the pond in Yard 5

Your ticket for the: Maia – Our Resident Tank