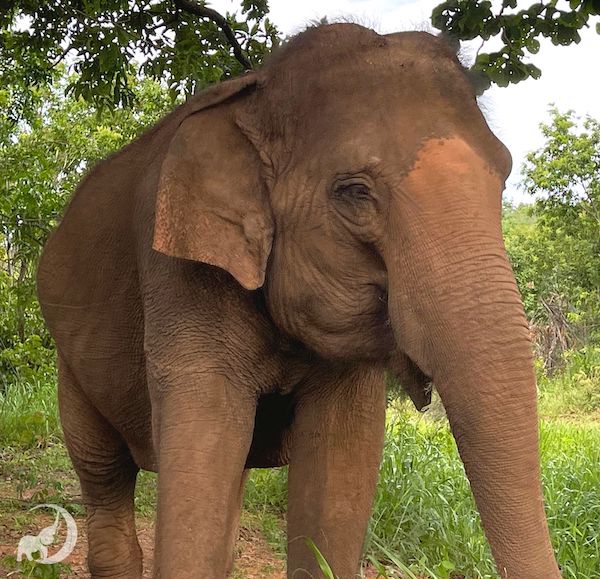 In her charming way, Maia is making training slightly more challenging by wanting to come and join in during Guille’s sessions. When Maia is there, it’s nearly impossible to get anything substantial done. Sometimes Scott will work a little with one elephant and then switch to the other; sometimes he just has to step back and evaluate the situation. It’s not necessarily bad to have distractions when first learning training behaviors because you can’t guarantee that there will be an ideal, perfectly calm environment when you’re working with elephants on a day-to-day basis. So, during those times when both elephants are there, we generally focus on easier things that they already know and keep it light.

When the two of them are close to the barn together during a session, they mostly just want to give Scott their noses. Since that’s something they both know how to do well by now, the point is to get Guille to go a little bit further than just touch a caregiver’s hand. It’s something they both know well, but, in hopes of getting some sort of reward, they try to be as sweet and perfect as possible while doing it. When this happens, we’ve found that often the best thing to do is step back for a moment, as a sort of reset. Occasionally, when a caregiver is working with Guille, they’ll look over and see Maia with her foot on the rail as if to say, “See, I’m doing it now. Don’t you want to come back over here?” Both girls are wise to the fact that rewards come with things like foot trimming so, while it’s endearing that they try to get extra treats, it’s not a good behavior to reinforce. When we know they are both going to try and join in, two caregivers, one for each, end up being the most effective solution.

Your ticket for the: Maia Makes Guille’s Training Interesting