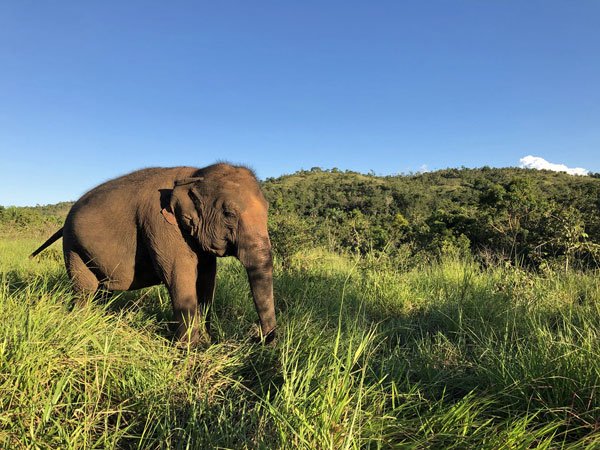 Maia loves food. She loves all food. When people ask what her favorite food is, we usually answer “everything.” We are going to have to respond differently now because we found a food she does not like.

As many of you know, we have quite a few chickens here. Most of the chickens live by the office, but when one gets bullied, or doesn’t get along with another rooster up top, we move him down to our mini flock of loved misfits by the barn.

We have a rooster named Woody, who is supposed to live by the barn. He is a bit of a loner, so he chooses to spend most of his time by himself and occasionally wanders off. He is by Maia and Rana more than he is the other roosters.

The other evening, Kat & Scott went to find Woody to drop off his dinner on their way to their house (which is near the office). While we usually keep elephant snacks on the four-wheeler, since they weren’t going into the habitat and were going home for the night, they only had chicken feed with them. When they found Woody, he was inside the elephant habitat, and Maia was nearby.

Woody came out of the habitat for his dinner, and Kat started feeding him. Scott walked over to say hi to Maia. While he was there, he noticed a tick on her and pulled it off. When we do tick checks on the girls, they get rewarded for staying still and allowing us to pick at them. Maia decided that Scott removing a tick earned her treats, so she started looking around, expecting something.

As they weren’t planning to see an elephant, all that was on the four-wheeler was chicken feed and sunflower seeds. Since Maia eats anything, Scott gave her a handful of sunflower seeds. She took them in her nose and blew them in her mouth. Maia chewed them up a little and put her nose back out. Scott gave her a few more, which she also put in her mouth. She made a ridiculous face and started spitting them out of her mouth and blew the rest out of her nose.

Maia has a big personality and made sure she spit them out with a bit of flare. She made all kinds of “ptoey, ptoey, ptoey!” noises and faces. It was the first time Kat or Scott has seen Maia spit out food – even if she doesn’t prefer something, she will suffer through it (dramatically), because, well, food.

They ended up giving her a few pieces of chicken feed, as that was the only other option. Yes, she thought the chicken feed was fine, which is further evidence of how strange it is that she doesn’t like sunflower seeds!

For those who are thinking that maybe elephants just don’t like sunflower seeds, they were actually used as a high-end reward in an elephant cognition study. Every participant thoroughly enjoyed them. So Maia is special in yet another way. 😉

Your ticket for the: Maia Loves Food!