Maia in the Aftermath of the Fire 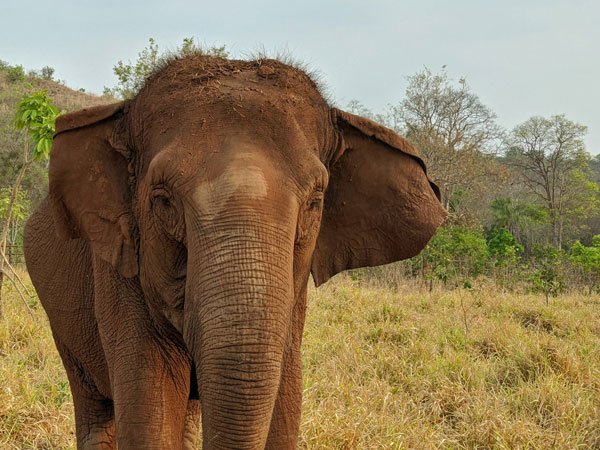 Others who have dealt with wildfires like this before have shared their experiences with us. Many said they didn’t start processing what happened until well after the danger passed. That’s true for many traumas; you get through the event, and then, much later, you feel the feelings you expected to feel during.

That seemed to happen with some of the animals here. A few days after, most of the elephants (and, to be honest, the humans as well) seemed to get a little “off” in their own ways. The humans all felt very tired – our best guess is that the adrenaline wore off. The non-human animals all seemed very quiet and subdued – even the chickens were quiet.

Maia’s mood shifted a fair bit. We dealt with wildfires several years ago, when our only elephants were Maia and Guida. The fires were much smaller, and very little of our property burned, but they both did very well during and after the fire. They were actually quite rumbly as the firemen set fire just outside of the front gate. The thought was- if the girls felt things were ok, then things must be ok. And they were.

A few days after this fire, Maia seemed a little more than quiet; she appeared a bit sullen. She spent some time alone in both Yard 4 and Yard 5. She avoided the burned area and never crossed the creek (which she hasn’t recently and probably won’t until they are wet). We believed it was something she had to work through herself, but we wanted to give her the ability to spend time with her friends as well.

Maia and Bambi have interacted some, but this didn’t seem like a good time to push a new relationship, with the fire so recent. We asked Bambi to come into a neighboring yard to allow Maia access to Mara and Rana’s space. The three spent some time together, and it shifted things for Maia a bit. She wasn’t clingy with them, but she spent some time with both and seemed lighter afterward. After a bit, she headed into Yard 4, where she found all of the hay that Lady didn’t find the day before. She continues to seem more like her usual self as the days go on.

Your ticket for the: Maia in the Aftermath of the Fire

Maia in the Aftermath of the Fire