Maia at Sunrise: A Symbolic Silhouette 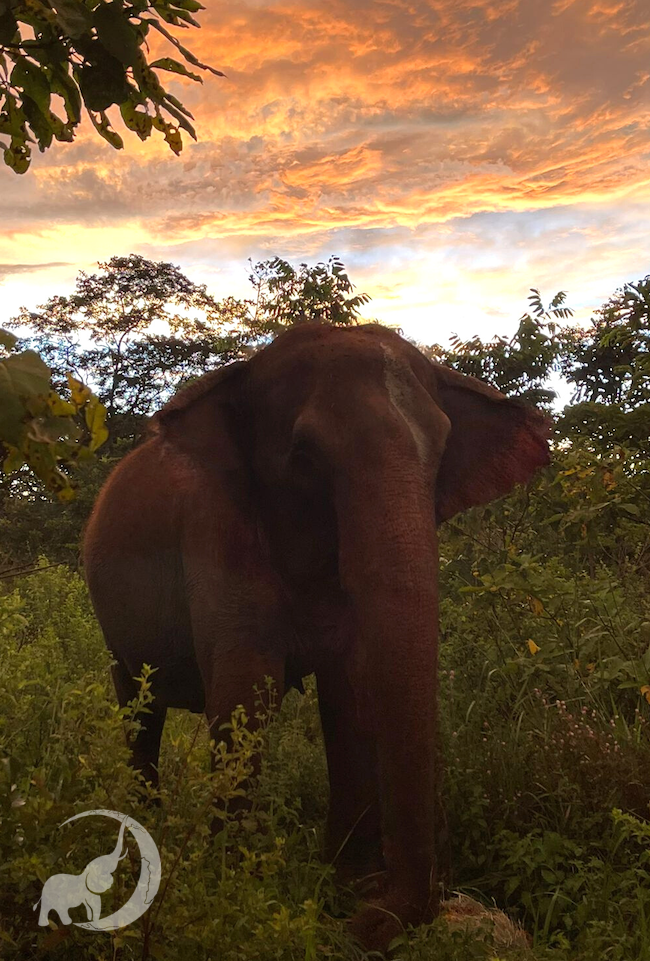 On a recent morning, Scott had woken earlier than usual – just as a gorgeous, orange-pink sun was beginning to crest over the horizon. (He and Kat’s house, “The Treehouse,” is ideal for watching sunrises.) It took a few minutes for the light to shine down into the valley but, when it did, he saw Maia grazing in the pasture.

With Ingo at sanctuary, there have been many discussions lately about autonomy and that having what we call “fences of freedom” creates massive amounts of safe space for elephants to roam at all times of the day and night. Ingo recently made the point that this is the first sanctuary he’s worked at where elephants are left to make their own decisions at night, rather than have their time outside dictated by humans.

It is almost never the norm for captive elephants to be able to roam freely at night. Most zoos have schedules for times when animals are inside and outside; other sanctuaries around the world might bring elephants in at night for security restrictions or other reasons, unable to allow them to wander the habitat, under the moonlight, when the rest of the world quiets down and a whole other natural world wakes up. When you zoom out to look at the big picture, so many captive animal schedules are loosely based on the human work time clock.

But here, at first light, Scott saw Maia grazing in the pasture, and it truly punctuated the type of mind shift that elephants experience when they have autonomy over something as simple as their own time; there will not be any time clock for them to adhere to. When no one is around, the elephants can do what they want; that is profound, impactful and, unfortunately, rare.

This photo of Lady was actually taken at sunset, but she is headed off to an evening of freedom.

Your ticket for the: Maia at Sunrise: A Symbolic Silhouette

Maia at Sunrise: A Symbolic Silhouette