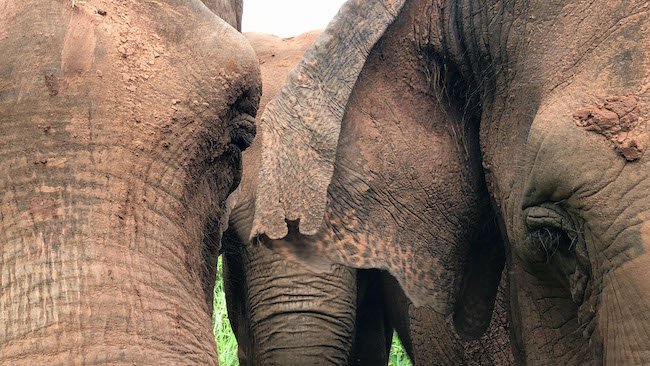 Here is the third installment in a three-part series about Maia, Mara, Rana, and Bambi. You can read parts one and two on the blog, if you want to start from the beginning.

After Scott spent some time with Maia, she finished eating and wandered off into the bushes.  A while later, we saw her near the pond in Yard 4. Unsurprisingly, she ended up in the pond.

By that point, Mara, Rana, and Bambi had found themselves at a mud wallow near the pond. While it’s close to the pond, it’s not within sight of it.  Rana was taking a standing nap under a shade tree near the mud wallow.

Mara and Bambi ended up getting super silly by rumbling, trumpeting, and having a party. They ran off into the bushes and thicket and circled around to the pond, on the opposite side of where Maia was still hanging out.  In response to their approach, she quickly stood and remained at the edge of the pond, covered in mud and soaking wet, watching their antics, curious, amused, and a little cautious.

Scott wasn’t sure how she was processing their behavior, so he brought her some hay to encourage her to stay in the area. Just as it’s good for Lady to stay and observe when she is uncertain, it’s also good for Maia to stay and watch, too. Around the time Maia got hay, Rana, with her dramatic gait, quickly approached her friends. It seemed she woke from her nap and wanted to see what everyone was so excited about.

Rana’s arrival took the party to the next level – not only did the trumpets and rumbles increase, but they started spinning and displaying other extremely playful behaviors. Maia stayed where she was, about 100-150 yards away, just watching and munching on her hay. She remained very calm and didn’t display any signs of nervousness or anxiety. Even though she isn’t typically so near during their parties, she has heard them many times over the past few months. This type of play isn’t at all uncommon to Maia; she has had her own out-of-control, silly parties many times before, particularly with sweet Guida, when was still with us, gracing the sanctuary with her glory and brilliance. On occasion, when Maia’s level of silliness was too intense, Guida would walk away and stand to the side, just as Maia did today.

Months ago, when Maia was first introduced to Mara, Mara would frequently become a little nervous or overwhelmed and physically take a few steps back. Meanwhile, Maia would hang out with Rana until Mara was ready to rejoin them. This experience has been a role-reversal for Maia – she was the “outsider” watching the exuberance and social interaction.  Sometimes, we all need a little breathing room and prefer to “elephant watch” from the other side of the room.

Eventually, everyone calmed down and wandered off. Things haven’t been quite so exciting in the few days since their initial introduction. We continue to separate them at night and give them daily opportunities to take the next steps. Of course, we are observing how things evolve and will continue to share their journeys with you as they unfold.

Photo of (left to right) Mara, Bambi, and Rana

Your ticket for the: Maia and the Girls Figuring it All Out – Part 3 of the Saga